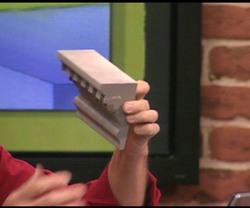 Lorraine from Elliot Lake, Ontario has mould growing out from the joint between the wall and the ceiling in her bedroom. This is a common problem caused by the fact that most houses are built with two pieces of wood on the top of the wall called a ?double header?, with no insulation at this spot. In addition, the ventilation for the attic passes right past these two pieces of wood, making them even colder. That makes the drywall on the inside cold enough to cause condensation and grow mould. Reducing the level of humidity in the house can often solve the problem. If that doesn't work, we need to find some way to insulate the double header.

One technique is to add ridged foam insulation against this area inside the soffits. Another is to glue on crown molding made of polystyrene on the inside. This molding was not intended as an insulation but it in fact insulates well and conveniently covers the three inches of cold wall. In either case you will first need to clean off the mould with a bleach and water mixture.

But remember, simply controlling the humidity will solve the problem in many homes.