Mould under the kitchen sink. 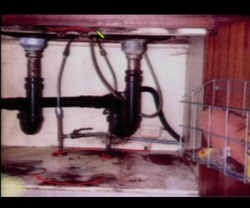 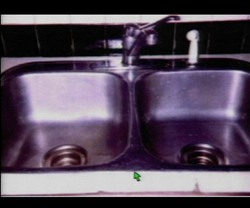 A viewer in Edmonton sent us some pretty nasty photos of mould under her sink. Two plumbers told her that the moisture was not coming from the plumbing.

I saw two things on her photos. First, mould was building up around the cold water pipe, meaning that there was humidity under the sink that was condensing on these pipes and keeping that area wet enough to grow mould. But it was the mould on the floor in front of the sink cabinet that caught my attention, then the fact that the plywood of the counter itself appeared to be rotting. My suspicion is that the stainless steel sink is not sealed water tight to the counter, and that there is constantly moisture from the counter itself dripping slowly down into the front part of the under-the-sink space. This would keep the whole area really humid and cause mould on the floor in front of the cabinet as well as the rotting of the counter itself.

Removing the sink and re-seating it into a bead of caulking could solve the problem, if the plywood is not already too damaged.