One of our viewers is about to insulate his basement and he has been told that he should not run the vapour barrier all the way to the floor. Fact or fiction?

So the real question is:  Should the insulation go all the way to the floor?

The answer, with one exception, is yes.

We used to be worried about freezing the footings on the outside if we insulated to the floor, but research has shown that insulating right to the floor will not affect the footing under the wall. In addition, you will never get a warm comfortable basement unless you insulate the entire wall. 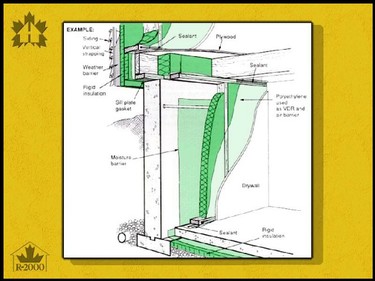 You will also notice in the graphic that there is a moisture barrier right against the concrete wall starting at ground level and going down under the wall, then the vapour barrier all the way up on the warm-in-winter side of the insulation. The protection against ground moisture does not go all the way to the top, to allow for moisture to escape at the top towards the outside.

The one exception is a field stone foundation. Here you have poor mortar and probably poor drainage on the outside. The wall has always been warm. If you freeze this delicate wall, you may create problems. Hence, if you are insulating on the inside it is a good safety measure to insulate a fieldstone foundation no more than one foot into the ground. If however you want to insulate on the outside, you can go as deep as you want since everything you do will just make that old wall dryer and warmer.

Of course water outside and a leak in the wall will cause moisture problems in any basement wall although that traditional plastic on the wall up to grade level should keep the water out of the insulation.

For details about leaving or creating air spaces anywhere in a basement wall see: Air Spaces in Walls, Myth and Science.

Considerable research has gone on in recent years at the Institute for Research in Construction (IRC) in Canada studying the fact that in different seasons and under different conditions moisture may move outward from the basement, and in other seasons it could be moving inward.  A lot of questions are still being raised about using a vapour barrier in the basement the same way we do on above grade walls.

THE SPECIAL CASE OF NEW CONSTRUCTION

In new construction, heavy condensation discovered behind insulation that is snug against a new basement wall or seen on the vapour barrier, is simply the 600 or so gallons of water used to make the wall are trying to escape.  Unfortunately in modern construction we are always trying to finish a house too quickly – in the old days we waited a full season before finishing a basement after construction.  For years we have had much success and some failure placing a poly sheet on the wall from ground level down, under the wall, and back up full height on the inside as shown in the R-2000 manual graphic above.  This tended to push water from the concrete under the wall where it would hopefully dry out in the basement. 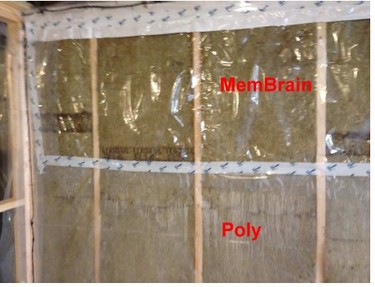 I reported in the Canadian Home Builder magazine in July 2014 on the considerable success that an Ontario builder, Doug Tarry, was having with a radically different approach to finishing a wall immediately after construction.

With a careful reading of the “performance” building code Tarry has obtained a green light from four municipalities, and a perfect score with clients, for an alternative to Poly.  Tarry has convinced the inspectors that basement walls are complicated; moisture moves in and out from summer to winter and differs from the top of the wall to the bottom.  A poly sheet is too categorical for a moving target.

1-    Nothing on the inside concrete

2-    Roxul Comfort Board over the wall – drainage and no wicking, dense and no air currents through the batts

To save money he puts poly on the bottom 4 feet and MemBrain on the top 4 feet – still leaving a large inward drying potential.

The Smart MemBrain™ was invented for mixed climates where the direction of moisture flow changes totally from summer to winter and poly placement is always half wrong.  Like plywood, as the RH on the surface of the MemBrain™ increases, it lets more moisture through – being a traditional vapour retarder in a dry environment like winter inside a Canadian house, and acting more like a breathable air barrier when the wall gets wet or the moisture flow changes direction because of air conditioning, allowing drying out of the wall.

The last word has not yet been written on insulating basements in a cold climate.