Strange white stuff around the patch on my concrete wall. 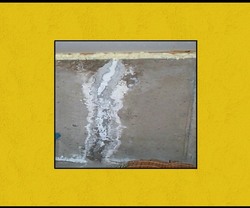 Ed from Quesnel, B.C. had patched a leak in his concrete wall. It worked -- no more water. But now a strange white stuff has developed all around the patch. What is happening?

Obviously he has succeeded in stopping the water from entering his basement, but he has not eliminated the presence of water on the other side of the wall. In fact, the water is probably still coming in the same crack, right up to his successful patch. Then it saturates the concrete all around the crack. Although the moisture will not "flow" through to the inside, the highly saturated concrete will dissolve salts from the concrete mix, and carry them to the inside surface. There the moisture evaporates and the salt gets left behind. We call this ?efflorescence? -- a word that means ?flowering? -- and indeed sometimes the salt crystals do look like something growing. If it forms on the surface, it is no real problem. If it forms just behind the surface, then it can crack off the surface as the salt crystals expand and we call it "spalling".

Ed needs to seal the concrete surface to stop the evaporation, or better yet, go outdoors and do some landscaping to get rid of the water.