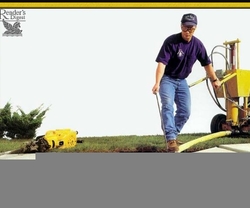 Don in Oakville Ontario has a garage floor that is sinking in the middle, collecting water from the car and creating a skating rink throughout the winter.

One solution would be to leave the concrete alone and put a drain in the middle, not dumping the water just under the slab where it would freeze and cause problems, but connect the drain to someplace to get rid of the water.

Another possibility is to pour more concrete to level it out, but that might not last with the salt and freeze thaw cycles unless he made it very thick, like a new slab.

It is also possible to raise the concrete slab as shown in the photo. In the west this is called Slab Jacking and in the east Pressure Grouting. Small holes are cut into the concrete slab and clay is forced under the slab until it rises to the right height. This then solidifies and provides a permanent support. The procedure can be used to straighten both slabs and sidewalks. In some regions, primarily the west, this is a common practice, and economic. I others, like Ontario, the procedure is little known and hence quite expensive. Compare the price of slab jacking with total slab replacement before making a decision.

Slab Jacking and Pressure Grouting services can be found in the yellow pages under concrete contractors.