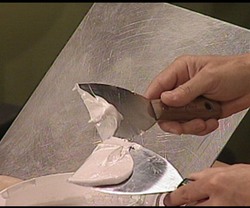 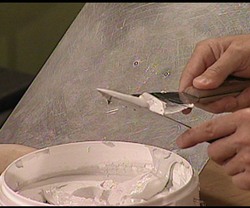 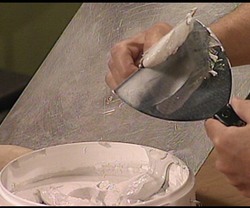 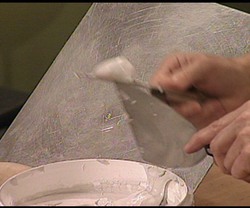 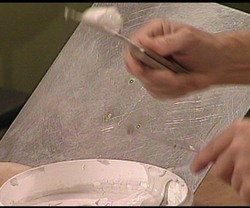 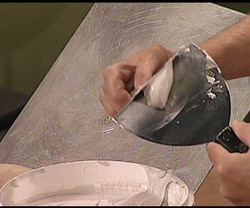 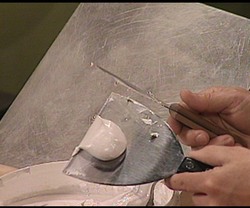 Before you get serious about tackling a drywall job, you should practice using two spatulas together, usually one a bit larger than the other. Butter one or both of them up with drywall compound (often called "mud"). Now slide one over the other with the two spatulas at right angles to each other. That should scoop most of the mud off of the lower one. Then flip the full one almost over so it is roughly vertical and scrape it off on the now almost clean one. Do that two or three times in a row and all the mud should be in a nice round pile in the middle of the first spatula. If you learn this dance, you?ll always be able to control the compound and get it where you want it, rather than on the floor.

Apply each coat of compound and then scrape it smooth, leaving little or nothing to sand. This may require three thin coats rather than two thick coats, but it should eliminate most of the sanding work and the dust. Each coat should be applied about two inches wider than the one before, until you have nicely filled the valley. Or, if you are working on a butt joint, where there is no valley and the paper will make a bump, spread the compound out at least a foot on each side of the joint, which will probably require four or more coats. Let it harden completely between coats to avoid scraping deep gouges and perhaps creating shrinkage cracks.