Where to put the vapour barrier in a special renovation. 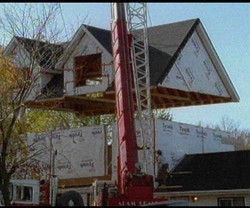 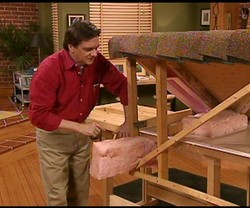 Michael from Edmonton added a second story to his house and has a question about the vapour barrier in one particular place. But first of all you have to see the video he sent us showing how he built and installed the roof! It was built, and even shingled, on the ground and then he used a crane to lift it into place. In fact this construction technique is becoming more and more common as contractors who are used to commercial construction start building single family houses. They are used to using cranes -- and roofers can't fall off a roof that is sitting on the ground.

In many renovations, there is enough paint already on the old wall (two coats of oil paint is enough) to qualify as a good vapour barrier. But you must take sealing up all the air leaks very seriously.