Food smells through the triplex 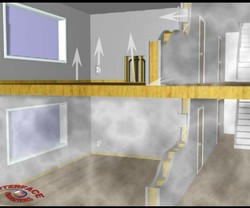 Sally from Toronto, Ontario has a problem with the neighbours that live below her in a triplex. She doesn't like their cooking odours and they just fill her apartment.

There are two things that can be done to temper the smells from the apartment below. First, caulk or foam up all the cracks between the two apartments. Not an easy task, but if you tackle the biggest ones, like the holes around the plumbing pipes and the electrical outlets and switches you will begin to slow down the movement of air from the apartment below. If the neighbours will give you access to their apartment so you can also seal cracks you can find from below, like around ceiling light fixtures, you will get even further.

Next, try to get the neighbours to install and use a good range hood and use it during cooking. If you are the landlord you could force that issue by installing one and even making it go on with the stove -- or have a switch in your apartment. That will create a bit of a vacuum in their apartment, compared to the air pressure in your apartment, which will keep the odours moving in the other direction.

You may be tempted to install a fan blowing air into your apartment to make the air pressure higher than in the apartment below you so that it would force the odours in the other direction. The catch is that it could also force a fire in that direction, and make it move through the apartments faster. It would also force moisture into any cracks you have in the walls. Such fans are not permitted in multiple family housing. Generally we try to keep our houses at the same or lower pressure than outdoors, not a higher pressure.

Working on the air sealing is the most practical approach because no one has to cooperate once it is done. Although it is detailed and time consuming, it is quite inexpensive.