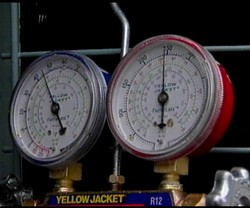 Leo from Kirkland, Quebec has been living a nightmare with his new house and his air source heat pump. He has put over $5,000 into heat pump repairs in the first 7 years and that doesn't count what was replaced for free because of warranties. Compressors kept burning out and valves gave out. Everything was installed by professionals, and repaired by licensed professionals, although two of them went bankrupt during this time (no wonder!). All the parts were from a reputable manufacturer. As a consumer, Leo was doing everything right, from keeping notes to having it maintained. None of this made any sense when Leo called into my Montreal radio program, so I rounded up Eldon Wilson from Electro Aid, a Montreal heating contractor that I have worked with in the past, and went to Leo's to check it out.

Eldon and his technicians went over everything with a fine tooth comb and lots of dials and measuring instruments, and finally the spotted the problem. The outside compressor was too big for the inside coil (or the other way around if you like). That is like trying to squeeze something big into something small, and that overheats the compressor and stresses the whole system. Each repairman looked at each broken part, and replaced it with exactly what was there before. Only Eldon spotted that this was a mismatched system. (He said that unusually high pressure at the compressor was his clue.)

At this point everything is working, for the moment, so Eldon suggested not doing anything, perhaps doing minor maintenance on it, but when it fails the next time -- tear the whole thing out (to get rid of any acid contaminated parts) and put in a properly balanced system.

Things work as a system, and in this case the good inside parts and the good outside parts just couldn't work together. The guy that did the first installation grabbed the wrong parts off the shelf and didn't install a balanced system.

The second point is that the installer is more important than the equipment -- and that goes for heat pumps, furnaces, ventilation systems, windows and shingles -- just to mention a few examples.