John in Kleinburg, Ontario asked if he should remove insulation from around his pot lights. Actually it is necessary to take the question much further.

Pot lights, or recessed lighting fixtures as they are properly called, do create a lot of heat and it is true that if traditional pot lights are buried in insulation they could cause a fire. Removing the insulation would just make the metal casing freezing cold when they were not on. During that time, they could be collecting frost from the household moisture. Turn on the light and it drips onto the ceiling or the floor or both.

Another problem is that they have many holes and unsealed seams, so they are permitting moist air from the house to flow almost freely into the attic, wasting much energy, often creating Ice Dams on the roof by melting the snow from below, and certainly collecting large quantities of condensation and frost inside the attic, possibly rotting out the roof deck. When you turn on the light, the added heat actually pumps this household air into the attic or roof space even faster. Bad stuff. In fact you can often identify the location of pot lights by looking for large icicles on the roof edge outside.

When a recessed light is installed in an empty space, like between the basement ceiling and the floor above, or between the first and second floor of a home, the light is not right next to wood and there is a lot of open air space to dissipate the heat.  This does not require any special light fixture.

When the light fixture will be covered with insulation or in contact with wood, it requires a protective outer box called an IC housing to prevent it from overheating.  IC will be marked right on the label alongside with an indication of the maximum wattage for the light bulbs.  This could be between floors of the house where sound batts or other soundproofing insulation has been installed, or between the upper ceiling of the house and the attic or roof space.

When the light fixture is placed in a ceiling that separates the heated space of the house from an unheated space, normally an attic or roof space, then the installation must have an IC housing and must be covered by a vapour barrier or a vapour barrier enclosure or be built air tight -- all designed to stop moist hot air from flowing past the vapour barrier. 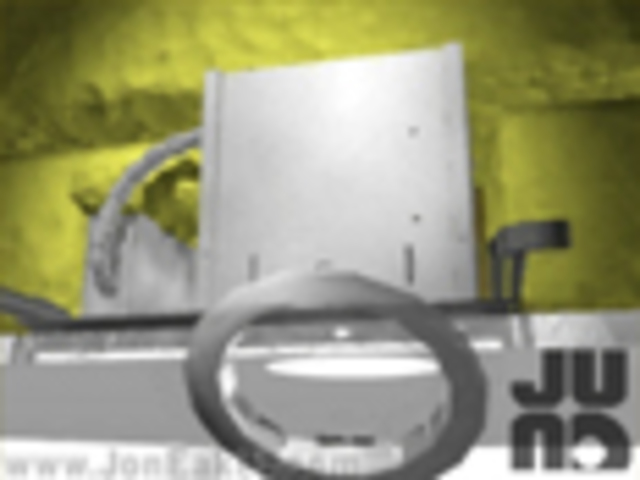 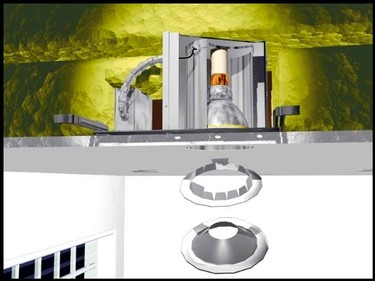 For a while it was recommended to build a box of plywood or drywall around the pot light to block all of this and give an air space to keep things cool, allowing piling insulation over the top. The problem with this box is that many of them caught fire themselves. So for a while we just said, "No recessed light fixtures at all in an insulating ceiling."

Then the lighting companies started making double shell "IC" recessed lighting casings designed to keep everything away from the hot inner casing. This allowed putting insulation directly over the unit. But they were still full of holes and still caused heat loss and moisture problems.

The photo shows a special recessed light made by Juno.  This is an old product today with a large hot light bulb but the principles are the same, even in new LED ceiling installations.  The inner box is constructed air tight. The outer box holds insulation, wires, or anything else away from the hot inner casing, permitting putting the insulation directly over the unit. The important detail, that is often overlooked by consumers and electricians alike, is the self adhesive gasket that seals the inner casing to the drywall or the vapour barrier, and covers the last of the air leak holes. That is why they call it Air Tight Ready, not just Air Tight. It is not Air Tight until you put the gasket on properly or assure that it is sealed to the air/vapour barrier.

This is the only type of fixture that will allow you to have recessed lights in an insulated ceiling without fire, heat loss or moisture problems. They even make a smaller unit designed for renovation that will slip into the existing ceiling cut-out if you cannot work from above.

AND NOW THEY ARE ALL TURNING TO LED LAMPS

The movement from very hot halogen to LED has certainly reduced the heat.  But some LED bulbs together with their transformers and circuitry can still get quite hot.  Before you put them into a closed insulated box, you should verify that the manufacturer certifies them as being safe for such an installation.  What could be safe in the ceiling of the basement with an empty air space between the ceiling and the floor above to cool things off may not be safe when buried under insulation and all the air drafts are sealed off.  A trapped low heat can build up.  The design of all the elements of a ceiling light fixture has to match its installation environment.  The vapour barrier box, or vapour barrier of the house draped over a recessed light must be rated for 90 degrees C.  Thin plastics are not temperature rated; certified vapour barrier polyethylene 6 mil sheets are rated to the code required 90 degrees C.

So LED lights reduce the heat dramatically, but air tight and vapour tight installations are still required for insulated ceilings separating a heated space from a cold space.  Today there are many manufacturers of LED ceiling fixtures, but not all of them are capable of being installed air tight.   In fact the building code requires that there are no unsealed electrical penetrations in the building’s air barrier.  People do what they want in renovations, but years down the road the ice, moisture or rot problem in the roof area will catch up to you – not to mention the increased heating bills by punching holes in the top of the house.  If you don’t want to install insulated ceiling light fixtures with IC housings (allowing burying it in insulation) and an air-tight seal to the vapour barrier (no hot moist air escape into the roof space), then install surface lighting and put the ceiling electrical box into a vapour barrier box which is sealed to the vapour barrier.  No air passages through the ceiling into the roof space!