Old Growth lumber, from the bottom of the river! 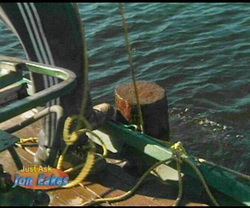 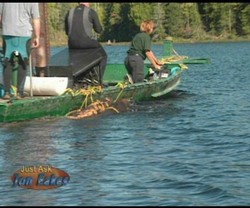 How do you get floor boards or cabinet making lumber from old growth trees without cutting a single tree out of the old growth forests? You pull it up off the bottom of the Ottawa River and its tributaries and mill it at "Logs End" near Bristol, Quebec.

Those where the major waterways where the big old trees were floated from the forest to the sawmill in the colonial days right up until modern trucking. The problem is that about 10% of all the trees cut simply sunk to the bottom of the river. There are probably 60 to 100,000 trees sitting down there right now and we only think about it when one of them half floats up and you run your boat right into it. So re-harvesting these trees improves the safety of the river, can lower the river bed by as much as four feet eventually, re-establishes the natural river bed and generally makes these frequently used waterways safer and healthier. Not a bad ecological claim for someone harvesting old growth lumber.

How about the wood? It doesn't rot down their because there is no oxygen and the water is quite cold. With 50 to 150 years soaking time, the resin has all leached out, leaving these boards almost warp free. River minerals have leached in, giving the wood unique slight colouring that looks great. There are few knots in old growth timber because they grew tall in tight forests so all the limbs were up on the top competing for sunlight. That same competition for sunlight slowed their growth, making as much as 10 times more annual rings per inch than new growth timber. Beautiful wood that is much stronger than the pine and spruce that we usually work with. The occasional oak and other hardwoods show up as well.

When the ice is off the river, the divers are pulling up as many as 300 logs a day, creating interesting jobs for a small rural community in north western Quebec.