Why are there cracks that come and go in my ceiling?

Chris from Clarenville, Newfoundland has a mysterious crack in his ceiling that you can see in the photo. It comes and goes with the seasons and nothing appears to be able to keep it closed. Why he asks. 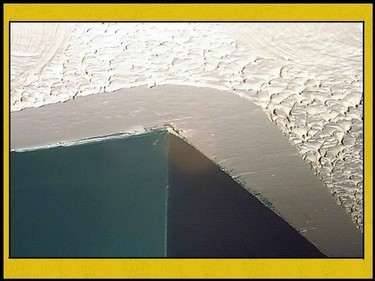 Many houses today are constructed with pre-fabricated "trusses" for the ceiling joists and roof rafters combined as you see in the graphic. Some, but not all, of the wood used for this reacts in a special way to temperature and moisture changes. As long as the entire triangular truss remains at the same temperature, nothing happens. When you add heavy insulation to an attic, the bottom cord of this assembly is wrapped in insulation, and is therefore in a very different environment than the two roof rafters. Given the right conditions this can cause the bottom cord to bow upward, cracking your plaster at the ceiling or even lifting the partition wall up and cracking the joint at the floor -- and certainly wreaking havoc with the doors and the attic air barriers. It may happen only once with a new house, or the ceiling may go up and down every year. 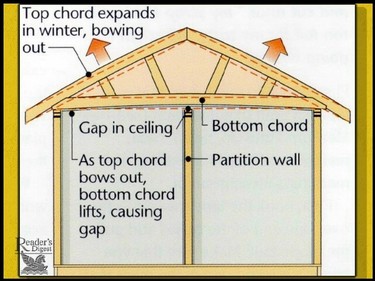 You cannot nail this bottom cord down, it will simply lift the wall off the floor. The forces involved are very strong. The true answer is to use a different truss design, one that is not a simple triangle -- such as a raised heel truss. This gives a bit of flexibility to the assembly and avoids this lifting action.

If you are changing ceiling drywall, the secret is to "float" the joints toward the middle of the house -- screwing to the ceiling no closer than 18 inches from the partition wall, and then attaching the edge to the wall, not the ceiling. The truss can move above and bend the ceiling panel without cracking the joint.

If you are not replacing the ceiling drywall, then you should consider installing a large cove molding on the wall about one to two inches below the ceiling, leaving a shadow design between the top of the cove and the ceiling. This shadow space will change with time, but not be noticeable below. (Put a rope light inside the cove and you have just justified the whole thing as a great decor concept.) 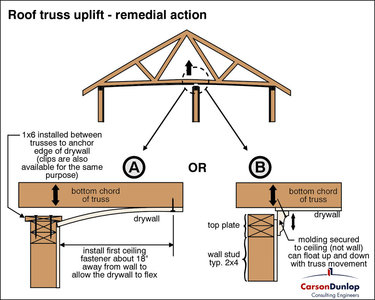 This problem is often confused with foundation shifting, which also cracks plaster and jams doors. Run a string across the ceiling in line with the trusses; if the center of the ceiling bows upwards, you probably have truss uplift (unless you live on Gumbo clay in the Prairies and the centre of the basement floor is pushing upwards).

Elgin wrote in after seeing this eposiode where I also showed how to use crown molding to hide the crack.

'On your Episode # 5165 you suggested nailing the crown moulding to the wall. I have always understood the proper way, is to nail the moulding to the ceiling then the open space is covered and the wall slides up and down behind it.'

Well Elgin, here is rarely only ONE proper way to do anything in construction. Both nailing molding to the ceiling and nailing to the wall will work, giving different results. I assume we are talking about a wall ceiling joint that is moving, probably due to truss up-lift, because if the joint is not moving, it doesn't matter how it is attached.

If you nail to the ceiling, the molding will rise and fall on the wall. This actually works quite well for white and light coloured walls. For dark coloured walls, the change in colour becomes obvious in about a year's time due to fading of the exposed portion and lack of fading on the hidden portion. This technique also limits repainting of the wall to the moment in the year when the truss up-lift is at its maximum height. This technique has the advantage that the look of the moulding does not vary.

When nailing to the wall, you must leave a definite space between the molding and the ceiling -- a shadow line. Changes in the shadow line will be less apparent when you start with a larger artistic gap between the molding and the ceiling. With a small or no gap, a gap will open and it will look like a problem, not an artistic choice. With a gap it is possible to paint the ceiling any time of the year because you can get paint back onto the ceiling over the moulding. Some people profit from this gap to make it big enough to actually place rope lighting or some other lighting behind the molding, letting the light spill out of the molding onto the ceiling, a very nice effect and a great cover-up for truss up-lift.

Sometimes this shifting causes cracks down a wall to wall joint.  Click here for one interesting way to hide that.

If you are building new in a cold climate you really should consider using Raised Heel Trusses or some other design that solves a lot of problems that come up with simple triangle trusses.