Why do bricks fall apart on the bottom row of a wall? 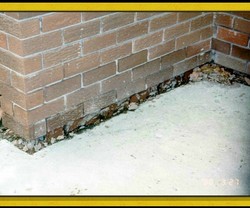 One viewer was asking why the bricks on his commercial building were falling apart on the bottom of the wall. In the photo you can see another viewer's problem from last year where her bricks fell all apart after pouring a concrete porch right up to the brick level. In her case, the concrete slopped to the wall, bringing all the rain water to the bottom row of bricks.

Any bricks that are allowed to soak in water, and then subjected to the freeze / thaw conditions of the Canadian climate, will probably break up like this.

So the answer to the question is simply that water, from somewhere, is soaking the bricks. This could be soil or porches being too high and bringing in the water. It could be faulty flashings on windows or the roof above, that feed a constant flow (however small but constant it may be) that keeps the bricks saturated. It could be a minor leakage problem, aggravated by someone plugging up the weeping holes that should be in one of the lower rows of bricks. Actually the weeping holes should be located where there is a "brick flashing" coming out from the brick mortar, back across the drainage space behind the bricks and lapped up under the building paper on the inside wall. That flashing catches any leaks behind the bricks and quickly drains them out away from the wall. Plug up the weep holes and you load the bottom row of bricks with water.

The solution is a real tough one as not only do you have to find and stop the water source, but then you are probably going to have to carefully remove a couple of bricks at time and replace them without inviting the rest of the bricks to fall down into the empty space. Install a brick flashing where there was none? Possible, but real tough to do.