June is building a new home in Kenora and they have decided to make what is often called a double wall structure to have room for lots of insulation. They are intending to build with 2x6 walls and then add another 2x4 on the inside to hold more insulation. They have been told that they could do some special things with the vapour retarder (commonly called a vapour barrier), but are not sure. 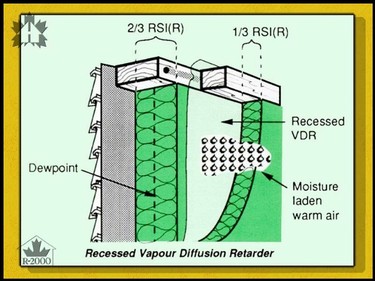 Now that's a problem for June. She wanted to put in 2x6 and then 2x4 -- which if she put her vapour retarder over the 2x6 before putting on the 2x4's would put too much insulation on the inside, and permit her vapour to get cold enough to condense on the vapour retarder surface, inside the wall. Using this rule with 2x6 construction, you should use 2x3 spacers on the inside to respect the 2/3rds x 1/3rds rule -- or use insulation on the cold side that has a higher R-value.

One of the nice side effects of this technique is that you can put up your basic wall, add insulation and vapour redarder, build the inner wall and then run all of your electrical wires without any holes in the vapour retarder, adding the last bit of insulation just before attaching the drywall.

The R-2000 program is in effect the culmination of 20 years of intensive building science research and practice on how to build extremely energy efficient, comfortable and healthy houses in our very difficult climate. I have worked with them, helped to develop the program and believe in how they build houses. In fact if all houses were built to the R-2000 requirements we would use far less energy to heat houses and have a healthier population. They are not all built like this drawing, in fact this is only one of many possible ways to help meet the R-2000 energy consumption target. For more information on the R-2000 program, or the more recent Net Zero Homes program, contact your local Home Builder's Association.