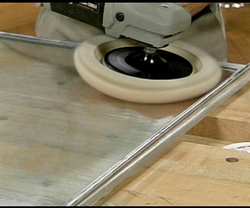 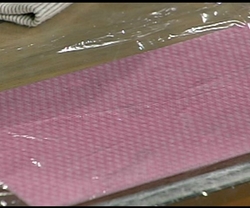 Mary from Sauble Beach, Ontario sent in the tip of cleaning off a heavy build-up of soap scum from her glass shower door with automobile polish and a power buffer. So we tried it.

It didn't seem to get down to perfectly clean, but it certainly did remove a lot. Mary just has that old car polish touch that I lack.

So while we had a really scum filled door we tried a lot of other things. The most effective with the least work was to put a towel on the door, soak it in either ammonia (bad smell) or CLR and then cover the towel with a plastic sheet to prevent evaporation. Let it sit half an hour or so and simply rinse off the cleaner -- the soap scum was gone or required very minimal wiping with a soft cloth.