Can I turn down the sensitivity of my smoke alarm? 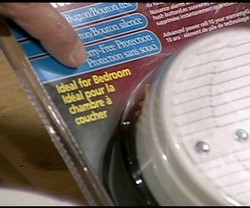 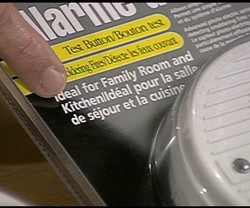 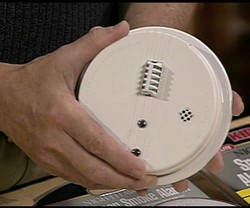 Rick is having trouble with the smoke detector near his kitchen going off too often and he wants to turn down its sensitivity. You can't do that Rick, but the real problem is that you probably have the wrong alarm installed near the kitchen. There are three types of fire alarms.

The most sensitive of them is called an Ionization alarm and it is recommended for bedroom areas where there should be nothing to set off false alarms but where you want the quickest response to a problem.

Slightly less sensitive is one that works with a different technology, called photo-electric detection. This is what is recommended for the kitchen areas to avoid having a toast detector.

The least sensitive is the heat detector, that will not go off because of smoke or other dense gasses at all, but will go if it senses the heat from an actual fire underway. We generally reserve this one for the garage where we would have a lot of false alarms from exhaust and workshop fumes with the other two.

If someone in the household is hard of hearing you should get a special smoke alarm strobe light that will flash strong enough to wake them right up.

Remember that the test button only tests the electronic circuitry. You should use incense, cigarette smoke or a special "smoke detector tester" aerosol to actually test the mechanism itself. Be ready to fan or blow the smoke out to shut it up. Also you should realise that the average life span of these things is 5 years. Most of them now have birthday stamps on them that tell you when they were manufactured. If it has been more than 5 years, you should replace them all, battery operated or hard wired alike. If there is no birthday stamp, it is over 5 years old.

Should you even bother to keep them in good shape? The fire department tells us that this device alone has reduced deaths by fire more than any other safety or fire prevention device yet invented.