What is that white stuff on my basement wall? 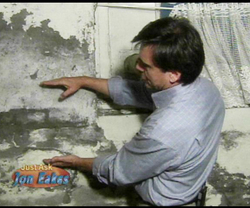 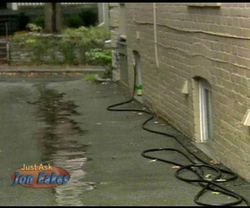 Judy has a pretty messy basement wall and has had several expensive estimates for fixing it.It almost looks like a mould or a fungus growing out of it, starting at a definite line quite high up on the wall.

When I looked through the window I could see that the white stuff was starting about a foot above the grade level outdoors. Also she has an old brick and mortar underground wall, typical in this part of Toronto.

The problem was clearly efflorescence, a surface accumulation of salt. What happens is that water saturates the wall on the outside, in this case right at the level of the walkway between the two houses, that dissolves the natural salts in the mortar which then migrate inward where the water is evaporating a foot above where it is coming into the wall. The salt is simply left behind. It is not mould but salt.

How to tell the difference? Drop a bit into water. If it dissolves, it is salt. If it does not dissolve, it is mould.

The solution is to get rid of the source of the water. Apparently that had been done just before Judy bought the house. As you can see there is a fairly new asphalt covering between the two houses with the water efficiently flowing down to the street and not touching either house. So in this case, the problem is already solved. All Judy has to do is to brush off all the salt, and if it doesn't want to all come off use muriatic acid - then parge the wall to make it clean. Because there is no more water source, the parging should stick well. Then she could either paint, or better yet, insulate the wall.