A close look at carpenter's hammers. 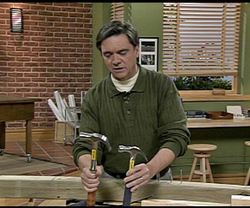 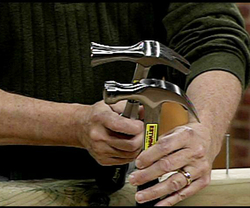 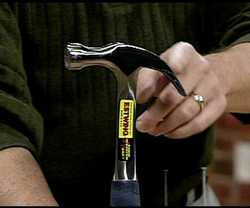 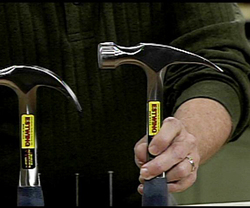 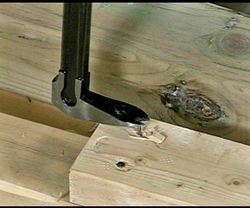 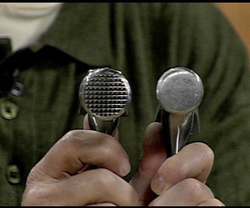 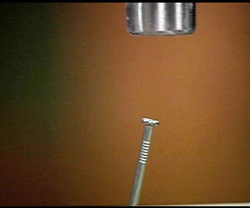 There is a confusing array of hammers on the store shelf, and then many more that aren't on the ordinary store shelves. You may be surprised to learn that there are cultural differences in hammers.

The first photo compares a North American with a British hammer. The head itself is similar but the British put a lot more meat behind with that chunky looking hammer.

The second photo compares ours with a Japanese hammer, which some people call a duck-bill hammer. They like that shock absorbing taper behind the head.

The Germans have square hammers.

Even in North America we have a lot of different hammers. All of these hammers are made by Estwing Hammers.

Our standard general purpose hammer is a curved back claw hammer, and for ordinary use around the house you should get a 16 ounce hammer, not too heavy, not too light.

A framing hammer has straight claws, to allow a framer to whack in-between two pieces of wood to pry them apart. The claws on both of these hammers are only made for pulling out smooth common nails. All the better gripping nails like spiral and galvanised can break the claws and should be pulled out with a nail puller, not the hammer's claws.

Some of our framing hammers have a grid on the face called a milled face. This is not used for delicate work because it will mar the wood, but it does help to drive nails straight.

In the one photo you see a regular hammer moving in line with the nail, but the head bent to one side. When it strikes the nail, the nail goes a bit down and a bit over as the hammer head slides off to one side.

In the second photo, the milled head hammer is also travelling in line with the nail, with the head at an angle, but the mill grooves are grabbing the edge of the nail and transferring all the force in the direction of motion. The hammer doesn't bounce off to one side as much, and the nail tends to go in straighter. You see, framers bend less nails because they have hammers made to help.