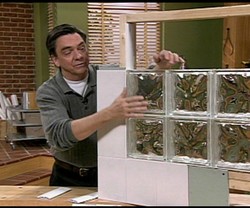 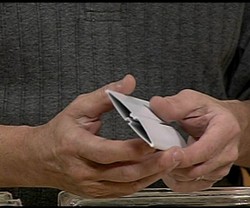 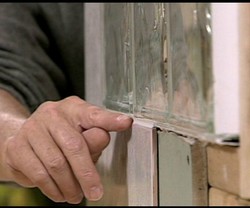 David has one of those showers with an openable sliding window right inside the shower. It is kind of nice having a window in a shower, if you have an open field and no neighbours. If you have neighbours, you will certainly have a curtain on the window, or frosted glass. In any event, take a good look at the window. It is made with one slider overlapping the other in such a way as to allow the rain to flow off. But on the inside, it is backwards. The shower water, or window condensation drips right onto the ledge between the two window panes, and fills up the ledge of the window as well. They are mould problems, and peeling paint problems.

Theoretically shower windows allow you to get rid of moisture in the bathroom. A fine idea in the summer, but in the winder who is going to open the window when it is -20C, and if you do open it, it won't close again.

My recommendation is to simply replace the window with a glass block wall. Don't use the acrylic blocks for this as they will fade in the sun. New products make this even easier as rather than having to use mortar between the joints, they now have plastic splines to stack the blocks, and simple silicone caulking to glue everything together and seal the joints. One trick is to place the blocks flush with the shower tiles to make one smooth wall that is easy to clean and doesn't collect water on a window shelf to build mould. The outside will need some flashing to join to the siding of the house.