Is it good practice to eleminate the chipboard on the outside of the house? 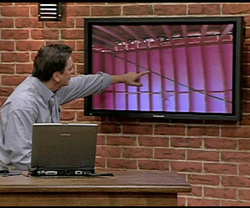 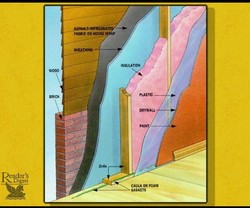 Wagish from Brampton, Ontario is worried about the ongoing construction of his new home as they have not put a wooden sheathing on the outside of the house. He asks: "Is the insulation value and strength of the wall compromised by not using the chipboard?".

First things first. "Chipboard" should never be used on the outside of a house for sheathing as it will not hold nails and is very easily damaged by moisture. We often find it on the outside of back yard sheds, and you can see how poor a construction material it is there. What we usually see on the outside of the wall is OSB or Oriented Strand Board, which is almost a form of plywood. It is also made up of "chips", but they are oriented in layers to give the material strength, and a better quality binder is used to hold it together.

Second thing is that outside of hurricane and earthquake areas, any wood panels on the outside of the house are overkill and unnecessary. They are only used because it is easy to build with them. If you think back way back before we used a lot of insulation, we simply had diagional 2x4's in the wall for bracing or what we call racking strength. When we wanted to fill the walls with insulation, that brace became a 1x3 knotched into the 2x4 on the outside run diagonally down the wall. The sheathing boards on the outside were commonly run horizontally and did little to add to racking strength. It is interesting to note that real wood sheathing is still common in Newfoundland, and because of the wind, it is often applied at 45 degrees, to effectivelly create some racking strength.

When plywood came into being it was used because it provided a good nailing base, and it was automatically square and easy to work with. Since then we have dropped the thickness and the quality of house sheathing panels to the point where they are no longer a good nailing base. All siding manufacturers insist that their siding be nailed into the studs. But we have used panels so long that we now believe them to be necessary.

In reality most of the racking strength of a house comes from the inside partition walls and the drywall. The building code only requires temporary bracing to the outer walls. There is no Canadian requirement for wood panels, with the exception of some earthquake practices in B.C.

That metal "T" strap that you see in the photo is actually 20% stronger than that old let-in 1x3, and even at that it is only considered temporary bracing until the rest of the house is up. For insulating value, wood is not very good. The reality is that by eleminating the wood sheathing and using that metal "T" strap and adding insulating non-structural foam panels over the wall, you can increase the thermal resistance of the wall by about 10% while reducing the cost by about 10%. You actually get more for less.

Yes Wagish, this is a good way to build a house.