Mysterious tracks in an attic. 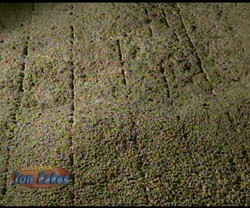 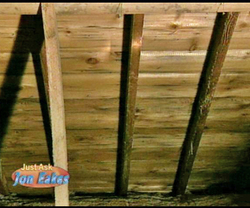 Dennis in Calgary, Alberta convinced me to come visit his attic which he was about to add ventilation to, but he had never been up in the attic.

This was a very interesting attic, and an interesting home. The cellulose insulation was matted down a bit and had a very strange grid pattern in the top. At first I tried to think of what kind of rake could have made those marks. Then when I followed the double tracks up to the roof rafters, I realized that this roof must be full of frost most of the winter for all those tracks were drip marks. The double tracks were water dripping off of both sides of every rafter in the roof.

The single tracks in the other direction, were perfectly lined up with each and every roof board, where the water would drip off the edge of the boards. Why had his roof not rotted down, despite a lot of black markings?

The entire roof, including the rafters were made of cedar in this owner built home that Dennis had purchased. But the owner built home had lots of openings to the moist air below and absolutely no ventilation into or out of the attic at all.

I set Denis to work on Air Sealing the cracks from below, then working on getting ventilation not only in the top of the roof but in through the soffits.