The ABC's of Fire Extinguishers.

Yes you should have at least one fire extinguisher in your house. But please understand their limitations.

Most extinguishers will empty in about 30 seconds or less. Don't count on a fire extinguisher to save your life.

Set your exit BEFORE fighting a fire 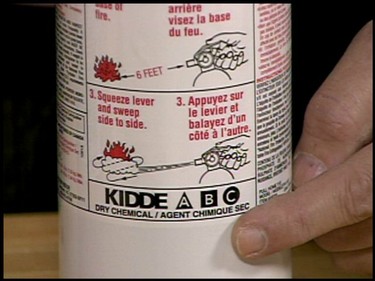 Only use the extinguisher when you have a safe exit at your back, then you can try to save the house while you still have a safe escape route.

Designer models - so you can keep it closer at hand

For years homeowners have complained that the big red fire extinguisher was ugly and they didn't want one hanging in their designer kitchen. So now they are bringing out chrome, brass, white and other extinguishers. 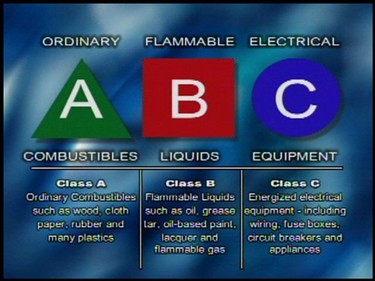 When it comes to buying fire extinguishers, they are rated by what kind of a fire they can put out. For general household use get the combination ABC unit that will handle about everything from wood, to grease to electrical fires.

No C types on chlorine chemicals!

If you have an extinguisher in a swimming pool pump room, it should be just an AB, because the C element will react with the chlorine chemicals for the pool and create a deadly gas.

The flames are not burning -- shoot the base. 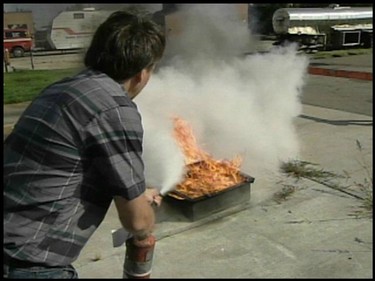 When you use a fire extinguisher, aim at the base of the flame and sweep back and fourth. If it doesn't work, get out.

Most people spray the extinguisher over the flames themselves, but the real fire is lower down, where the stuff is actually burning. Sweep the extinguisher spray back and fourth across the base of the flames -- always with your back to the exit. Don't forget, the smoke will get you before the flames do so don't try to fight a big fire, and don't fight any fire for very long. Get out with your life. The house we can fix or rebuild later.