Can I have too many roof vents? 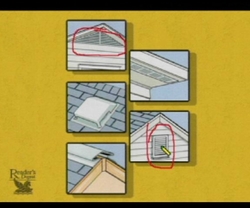 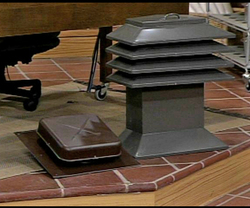 For those who are not sure what all these vents that Todd is talking about are, the two circled in the photo are the gable end vents. The other photo shows a low profile vent on the floor next to a MaxiVent.

The only problem he can have with all this ventilation is in the summer, or when the low profile vents are not covered in snow, because there is a kind of short circuit effect between the two different kinds of roof vents. Wind tends to circulate in the top of the attic and the soffit vents are left out of the equation. When you have either roof vents, or gable vents, the soffit vents are what supply the air and you get even circulation throughout the attic.

Your current system could work the way it is, just check the attic a couple of times a year, especially during a cold spell in winter, to see if there is frost accumulation inside the attic.

If I was building a new roof in Quebec's snow belt I would close off both the gable end vents and the low profile vents and leave the MaxiVent / soffit vent system.

By the way, MaxiVent has become so successful that many people are imitating this large square copula. I have not seen anyone yet who has as good a snow baffle system as the Maximum product which keeps blowing snow out of the attic.