The wind is opening my roof hatch. 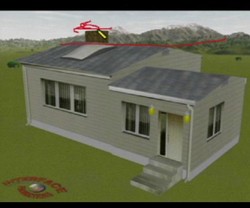 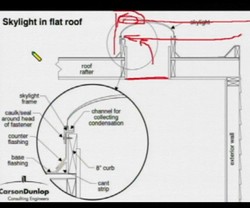 Karl lives in a new house next to an undeveloped area. Strong winds come across from the open North West. "The access panel in the ceiling of our walk-in closet lifts and dislodges on top of the 18 inch "passage way" that exits to the roof. What causes this and how to stop it?"

An access hatch to the roof from inside the house is a bit unusual and I imagine that there is a shelter of some sort on the top, and probably a flat top roof. When wind blows across the top of an open chimney it causes a suction on the air inside the chimney, a bit like when you blow across the top of a bottle and it whistles. If the wind is hitting just right across the area above this access hatch it can easily create a vacuum. But just like with a bottle, if you divert the air just slightly, it doesn't whistle any more. If this wind pattern could be altered, probably just slightly, it would stop creating such a draw through this 18 "passage way". Just building houses next door may stop the problem, or even large trees on the side the wind is coming from.

The second graphic is actually of a skylight tunnel, but illustrates a bit what Karl is dealing with. You could set up some kind of a wind baffle, probably on the downwind side of the passage way, that would alter the movement of air over the top of the passage way. I would suggest setting up something sturdy but temporary and play with it until you find the right size and spot to alter the wind pattern. You could try removing it once the neighbours build in.