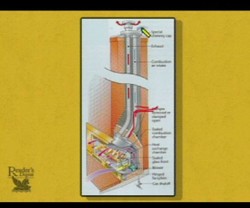 One of our viewers caught our cameras in the renovation centre and asked a really good question. He has a sealed combustion gas fire place insert and has been told that both the fresh air coming in and the exhaust gasses going out have to go all the way up the chimney and out. He wanted to know why he can't just cut through the chimney wall and put the fresh air intake up just a few feet from the fireplace, saving a lot of expensive ductwork?

That sounded logical to me too so I set about trying to find out why the manufacturer insisted on going all the way up with both. I know that there are "through the wall" systems that go right behind a gas fireplace, why can't we get rid of the hot stuff up through the chimney and bring in the cold stuff elsewhere?

I discovered that there has been a Canadian industrial committee debating this very question for over a year, and they finally dissolved the committee because they couldn't come to agreement, leaving the requirement that they both go up. But at least I finally learned what the potential problem is.

If they both go out the top of the chimney, then both ducts get hit by exactly the same wind pressures. This is also true with the "through the wall" systems. Both the intake and the output have the same varying wind pressure on them, both at the same time. If you put one pipe on one face of the house and the other pipe on the top of the house, then the wind could potentially push stronger on the exhaust and even create a suction on the intake, causing the furnace to function backwards -- not a good idea. The heat build up in a situation like that could be dangerous.

And that all makes sense because we do require that HRV ventilation systems have both input and output on the same face of the house, for the very same wind pressure reasons.

Somehow it is a little easier to accept when we understand the potential problems.