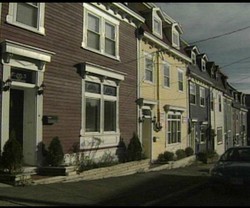 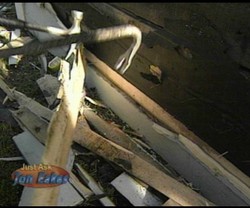 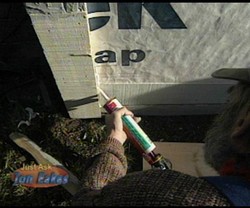 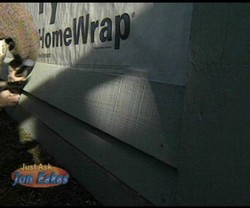 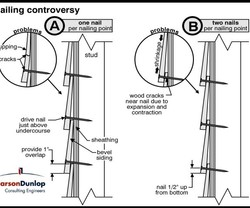 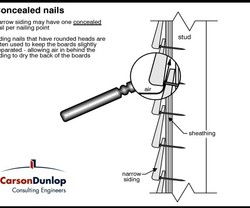 There is probably no place in the world that gets tougher siding exposure than in Newfoundland and it may surprise you that wood clapboard siding is still the dominant siding on the Island. But it does require maintenance and occasional repair or replacement. Aiden Duff showed us how it is done in St. John's Kiddy Viddy area.

When Aiden tore off the old siding it was amazing to see the 18 inch wide sheathing boards in good condition behind the siding. Aiden always puts the rough cut side of the siding to the outside because it takes and holds the stain so much better than the milled side, and gives it that traditional look. Another trick is to caulk before putting on the clapboard, called "back caulking". That way the joint is sealed against the weather but the caulking itself is protected from the sun.

Now there is a bit of a controversy as to what is the best way to put in the nails. Aiden has his nail go through only one board but squeeze the other one tight as in the photo. Others put the nail through both layers as in the other part of the photo. As I asked around it appeared that maybe it is not so much of a controversy after all. With narrow boards there is less overlap, and because they are narrower, less shrinkage. So when narrow boards are nailed through both layers, there seems to not be the problem of splitting and you get better wind resistance. When you have wider boards, there is more overlap and more shrinkage. Nailing through both boards would probably end up cracking the wood that wanted to shrink, but since there is more overlap, nailing just through one board still holds the wood tight to the wall. It is however important to nail just barely above the end of the board below to avoid bending the top board and cracking it with the nail directly.