Burn Smell in the shower

Bill from Newcastle, Ontario gets that smell in the morning and wants to know how to get rid of it. This is not a common problem, but it is certainly not unknown. It is not common because it requires a specific set of circumstances to create this problem.

First it requires the presence of a specific type of sulfate reducing bacteria called "desulfovibrio". This is not a dangerous bacteria, but it is a living organism. Then it requires the presence of free Hydrogen and an absence of Oxygen. With all of this together, hydrogen sulfide gas is formed that can smell like just slightly rotten eggs or like that familiar smell of sulphur burning on the end of a match. This problem is more prevalent in softened water containing sodium in place of calcium and magnesium.

So how do we get this in the hot water system and why does it only last a couple of minutes in the morning? And how can we eliminate it?

Most hot water tanks that sit hot and still for several hours will have any free oxygen concentrated at the top of the tank with the rest of the water relatively oxygen starved. The bacteria will usually, but not only, come from a well or lake water source. Chlorinated city water will rarely have this bacteria. Now, how do we get the hydrogen? 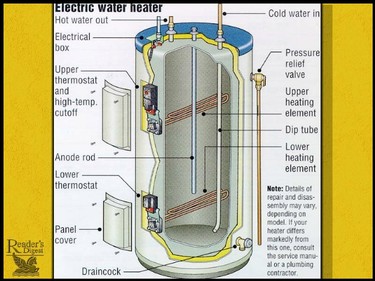 Every hot water tank has a thing called an Anode rod. This is a rod of metal that hangs down near the centre of the tank. Hot water, normal water minerals and metal will always cause some degree of electrical movement or galvanic action that results in corrosion of the metal. It is almost impossible to line the inside of a hot water tank perfectly so there is usually small areas of the metal of the tank itself, usually at seams, that are exposed to the water. If there was no anode rod, these weak points in the tank would corrode rather quickly. So the Anode rod is made out of a special metal that will attract this corrosive action to itself, saving the tank. It is a sacrificial rod, that may need changing occasionally depending on the nature of your water. The most efficient metal for doing this job is Magnesium. But a Magnesium anode, in doing it's proper job, gives off fair quantities of hydrogen. That is no problem for most of us, because we don't have that specific bacteria in the tank. But when we do, you get that odour forming overnight (when the oxygen is gone). This sulphur based gas collects in the top of the tank waiting to come out at the beginning of that first morning shower. 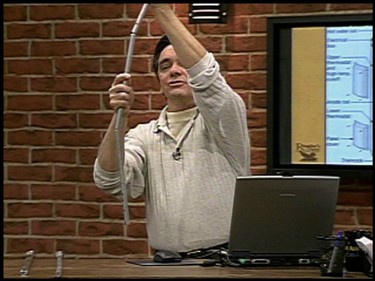 What to do? Usually the problem can be solved simply by installing a slightly less efficient Aluminium anode rod. You can even get anode rods that bend, allowing you to run it down from the top despite the low ceiling of the basement, avoiding having to totally disconnect the tank to do this job. You do of course have to turn off the gas or the electricity and turn off the water and drain the pipes from up above before trying to remove the anode rod.

If this doesn't solve the problem, then you need to kill all the bacteria in the system. Drain the tank down about 2/3 of the way (power and water off of course). Pour a gallon of bleach in through the anode hole. Insert the anode and refill the tank, but don't let a faucet run. Leave it 12 hours, then flush hot water through every hot water faucet in the house at the same time, until there is no more bleach in the water. You may have to do this two or three times.  For instructions that go even further, adding zinc pellets to the water to reduce futher the gassing action, the tank manufacturer Giant has written this technical bulliten.

Now, even if the bacteria is still present in the well water, it will probably not get a foothold in your hot water tank, and you have radically reduced the quantity of hydrogen present, so the smell should be gone. If all of this does not solve the problem you will have to add a chlorine bleeder to the plumbing system that kills bacteria all the time, just like the municipal water systems.

The fact that it clears from the bottom up and leaves no deposit indicates that this is not a mineral type of material in suspension, but rather bubbles of something that evaporate.  Peter is on city water and his neighbours don't have this problem -- and local plumbers have no idea what it is.

When I threw this at the technical people at GSW Water Heaters they knew all about it although it is rather rare.  The good news is that it is probably not a health problem at all.  Having the water tested could confirm that, but usually it is nothing more than air bubbles.  Why in the hot water and not the cold?

If any gas gets into the water supply, probably from a pump gasket or similar source, those air bubbles are under pressure.  When they flow into a glass, they expand a bit and then float out of the glass.  With cold water they are very small and are simply not noticed.  With the hot water, they are very small, but hotter, so when the pressure of the system is gone, they expand considerably more and become large enough to be seen, causing that clowdy look as they evaporate.  If you cannot locate the source of the air getting into the system, you probably can't stop it.  They have found that installing an aerator on the tip of the faucet will usually greatly reduce the problem if not eleminate it.  The aerator simply forces the bubbles out of the water before they get into the glass.

Am I a strange man just because I enjoy finding out all the details of something like this? Probably no stranger than you, because you read all the way to the end of the story. Thanks to GSW hot water tank division for helping me out with these.  Click here for a full listing of the very informative GSW Hot Water Tank technical bulletins.