Replacing screens in doors and windows & New Types of Screens 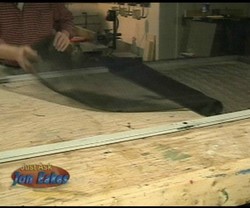 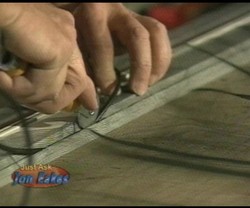 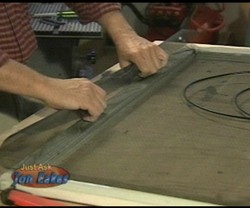 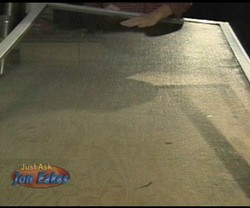 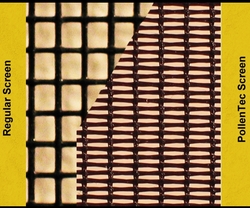 When it comes to installing screens into a screen door I have always had problems keeping the mesh straight and avoiding wrinkles in the corners when I followed the standard instructions of starting at one corner and working my way around, unless I was working with someone else to help hold it all in place.

When working alone I find it much easier to obtain good results by doing one side at a time and by starting in the centre of the side, working to each end.  I do the two wide sides first, then the two ends.  Keep your eye on the grid of the screen to place it parallel to the sides, and to keep it parallel as you install the screen.

If it is a wooden frame simply staple it into place with short staples and then cover the staples with the wooden spline trim piece.

If it is a frame with a groove made to receive a rubber spline, be sure your old spline is complete and in good shape or obtain a new one where you buy the screen.  Always work with an inexpensive "spline roller" which you also purchace where you buy the screen.  This is a little wheel tool that looks much like a pizza cutter but it is not sharp.  Using spatulas and screwdrivers for this job usually results in holes in the screen -- use the spline roller.

Attach one long side first. Simply lay out the screen and the rubber spline and begining at the middle use the spline roller to force the rubber down on the screen and both of them into the slot.  It may be easier for you to go half way down all along the side and then return and gently roll it all the way to the bottom. Finish one side before moving to the other side or it may pop out.

If it is a non-streaching screen -- with your hand bend the screen flat to the frame after entering the first spline.  This will take some looseness out of the installation.  Pull it flat, but not forced, to the other side remembering that as you force the spline into its slot it will draw the screen tighter.

If it is a streaching screen -- although the material is easier to force into the slot go gently to avoid creating a crease in the screen.  When moving to the other side, pull it flat but do not streach it with much force as with a large tension on it the aluminum frame with bow in with time -- letting the bugs right around the frame.  Just lay it flat as with the traditional screen, make sure it is not sagging down to your worktable in the middle and remember that inserting the spline will take up a little more slack.

Be careful with the pline roller to not slide off to the inside and cut the mesh.

A few notes about the screen material:

Silver coloured screens appear on the shelf to be "less noticeable" but when the sun shines on them they are actually more noticeable than the traditional black.  Surprisingly, we can actually see better through the black screen than the silver screen.  I suspect it is because it doesn't get "lighted up" with the sun so our eye doesn't tend to focus on it.

A finger hole in a screen can be temporially patched with two pieces of scotch tape -- one on each side so that one tape sticks to the other tape as it will not really stick well to the screen.

A permenant, but not necessarially invisible patch in a metal screen is to cut a piece of screen about about half an inch larger all around than the hole.  Use sissors or wire cutters (or finger nail clippers) to remove wires all around the patch piece so that there are little wires sticking out.  Bend all of these little "feet" up 90 degrees from the screen, then insert them into the broken screen being patched and fold the little feet over to hold it in place.

A metal screen patch can be put into a streachable screen, but streachable screen by itself doesn't work well unelss you glue it into place because you can't bend the little feet over like staples.  You can however "sew" a flexible patch onto a larger screen with needle and thread.

Fewer or No bugs -- two new types of screens

If someone in the house has alergies, ordinary screens will not stop the pollen.  In fact if you have "no-see-ums", those very tiny insects that bite, regular screens will not stop them either.  There do exist screens that have such a fine weave that they can actually block very small pollen and at the same time stop the no-see-ums. Having 5 threads per square rather than 2 as you can see in the photo aboave, they will allow allergy sufferers to open their windows in the spring like everyone else.  They do cut out a bit of the light, block a bit of your vision and reduce air flow -- but that is a small price to pay to be able to open windows for the first time in pollen or no-see-ums situations.  You can find them at PollenTec.com.

The Phifer company brought out a new screen in 2011 called BetterVue that appears to be halfway between traditional screens and PollenTec screens.  This screen has 30% smaller holes to keep out more insects but with 5% greater "openness" -- giving better visibility, light transmittance and airflow!  So I had to ask them -- "How do you do that?"  The key is smaller yarn or wire diameters.  The wire itself is less of an obstruction.  This can be a real advance for those of us who "fell" the visual effect of closing in when we put up the screens in the spring.