The Business of Renovation -- Part 2 -- The Contract

Should you have a contract or not for every renovation? According to David Foster, author of the pamphlet Get It In Writing, except for the simplest of maintenance tasks, you need a contract, and for a lot of reasons that you may have never thought of.

If you would like to read the other two parts of this series, Part #1 - The Industry and Part #3 The Contractor. 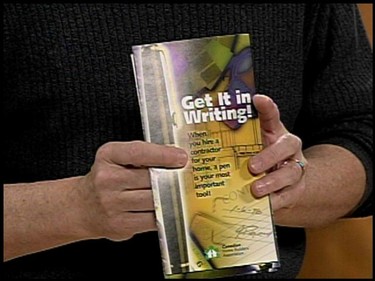 The contract for a renovation project actually has three parts to it: the contract itself that states everything that both parties agree to; the plans if there is construction involved; and written specifications that detail the colours, types, models even the quality of everything that is going into this renovation. The absence of a set of specifications is often the starting point of problems in a job where the homeowner expects one thing and the contractor delivers another.

The contract must be signed before the work begins. The parts that you are used to seeing in a contract will describe the agreement (what is going to be done), who will do the work, when it will begin and when it will finish, cost and payment method. Good so far.

Probably one of the most important parts of a contract, the part that is missing when there is no contract even if there is a very good relationship between the owner and the workmen, is Risk Protection. The contract should contain proof that the contractor is in good standing with your provincial Workman's Compensation and that they have liability insurance to cover all eventualities. If the people working on your house do not have this kind of Risk Protection, you are automatically considered a general contractor and you are personally liable for all damages and any injuries. In theory you should register as a contractor and pay workman's compensation. Understand what Workman's Compensation really is. It specifies just how much will be paid for any job related injury, and most importantly, limits your liability to that payment. Without it, an injured individual that you allowed to work on your property can sue you for everything you own if he injures himself. The contract should include his liability insurance policy numbers as well as his workman's compensation registration and you should call both to verify that they are valid. Failing to do this could cost you your home, even when the work was just installing a window.

THE COST OF CASH

Cash deals may save you a little money, but they could cost you your future because a cash deal will never remove your liability for anything that could go wrong, and your homeowner's insurance will probably not cover the problem either.

In 2013 the TD Insurance company took a survey of their customers and renovation.  When was the last time you read your homeowner’s insurance policy?  Here are three insurance myths that you should reflect on before undertaking any major renovations.

They found that the majority of homeowners are not considering the insurance implications of their renovations: Only 6 per cent checked their policy to ensure they were covered during the upgrades and just 16 per cent asked their insurer if their policy needed an update following their last renovation.

Myth #1: "My home will be covered under my original insurance policy during renovations."

Fifty-six percent of homeowners incorrectly believe they will always be covered by their original home insurance policy while their home is being renovated, and 24 per cent are unaware that moving out for more than 30 days during renovations requires a policy update.

Upgrades requiring extensive work, such as adding an extension to your home, may require homeowners to change their entire policy to a building under construction. Further, if no one is living in the home during renovations, it becomes an easier target for thieves and undetected water damage, which is why the insurer may require a vacancy permit if the home is left vacant for more than a month.

Myth #2: "If my contractor is injured on my property while working, his insurance will cover it."

Contractors are trained professionals, but accidents can and do happen. However, 41 per cent of homeowners incorrectly believe that if a contractor is hurt on their property while working, they will not be liable.

If a contractor or their employees are injured on the property, the homeowner could be liable for their medical bills, lost wages, or damages for pain and suffering-all out of their own pocket.  This can be especially true if the people working on your house are not licensed contractors, and even if they do have their licenses, ask them to give you a copy of their public liability insurance certificate.  You can call and verify if the paper you have before you is legit and paid up insurance.

Many homeowners don't know which renovations can decrease your premiums, but are willing to find savings: eight-in-ten homeowners (79%) said they would be likely to make certain upgrades to their home if they could save money on insurance premiums in the longer term. Simple renovations like installing security devices, such as alarm systems and deadbolts, or fixing your weathered roof may decrease your premiums.

On the other hand, many homeowners don't know the types of renovations that can impact their premiums: 22 per cent are unaware that upgrading the electrical system or replacing a weathered roof could lower your premiums, and 53 per cent did not know that installing granite countertops or expensive appliances could increase their premiums. Anything that may impact the value of your home or probability of a claim will also affect what and how much insurance coverage is required.

It is worth taking a look at the booklet: Get It In Writing, or the The Renovation Roadmap.

If you would like to read the other two parts of this series, Part #1 - The Industry and Part #3 The Contractor.