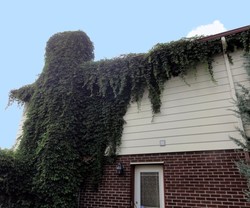 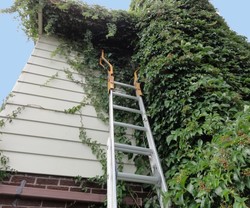 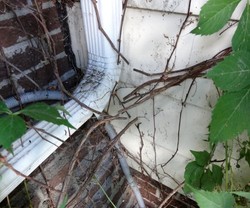 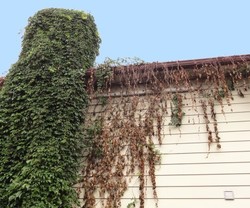 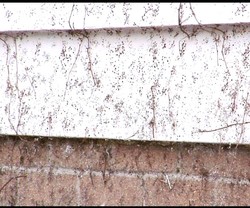 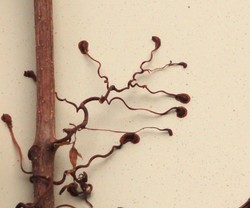 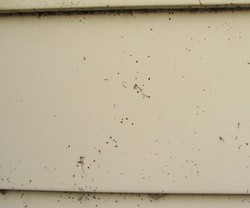 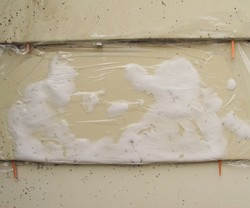 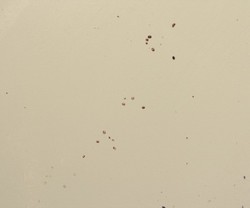 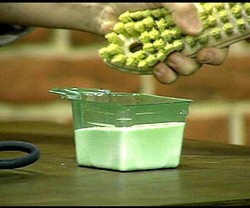 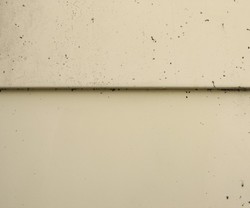 Unfortunately John, you have a problem there. Ivy, Virginia creeper vines and other climbing plants not only grip onto surfaces, porous or not, but on brick and wood, they can actually sends little gripping roots into the siding. We can get much of it off, but depending on the age of the ivy, you could have significant damage done. With brick, this often requires repointing. Which is to say; from a building science point of view, climbing plants are a very bad idea.

Can the suckers be removed?

OK, given that there is ivy on the wall, what is the best way to get rid of it? You were right to cut the plant to kill it. But the experts are telling me that you then want to wait for it to turn colour, but not let it get hard -- usually about 3 weeks from cutting off the plant. If you act too soon, it is still griping strongly to the wall. If you wait too long, the residue on the wall becomes too hard. If you get it right in-between the two, you can simply use soapy water and a bristle brush to scrub off the suckers. They tell me nothing else will work.

I tried soap and water and it didn't do much. Having had success with removing moss from asphalt roofs with non-bleach deck "restorer" cleaners I tried that on a bit of aluminum siding.  It did effectively dissolve the little stuck part of the plant -- and the PAINT on the siding as well.  Don't bother trying - this stuff is too strong.

Finally in the summer of 2012 I found a homeowner who has chosen to keep Virginia creeper vines on the brick chimney for aesthetic reasons, but wants to keep it trimmed away from the roof and the siding -- a regular gardening job.  In previous years the growth was cut back from the aluminum siding and ripped immediately off -- leaving all kinds of little pock marks that didn't want to come off, as you can see in the 5th photo above.

The 6th photo shows us what we are really dealing with.  The grippers touch a surface and secrete what appears to be the best glue in the world -- our glue chemists should study this stuff!

We started by cutting branches that headed over to the siding.  This was done all the way up and then around the chimney on the roof.

After several weeks of experimenting I discovered that waiting just until the leaves are totally brown does allow ripping off most of the plant, as in the 7th photo and does not rip off any paint.  What is left are hard shells with a bit softer centre all stuck on top of the paint but not cutting into the paint. The soap and water recommended didn't do much to this shell and hard scrubbing did start to remove paint.

Then I decided to try to soak it off.  I mixed up a very thick paste of bicarbonate of soda and water.  To keep it from drying immediately I covered it with some plastic wrap.  I didn't want duct tape marks all over the siding so I restricted myself to a small area and used tooth picks stuck into the existing weeping holes under every row of the aluminum siding to hold it in place.  This actually held up to a very strong wind storm.  I tried hours, days and multiple days to discover that most of the softening will happen in 4 to 8 hours and works best not in the sun -- so wait for the sun to pass by or put this on over night.  If you let it dry out, you are back to where you started -- no damage but no progress.

Then I rinsed off the bicarbonate of soda and found that a bristle brush or better yet a soft Scotch Bright type of kitchen pad was just strong enough to work on the suckers without bothering the paint.  But that only succeeded in breaking the hard shell -- leaving what look like little rings. Rather than trying soaking again, which would probably have worked, I made a fairly liquid mix of the same bicarbonate of soda and with that cleaning pad discovered that with a lot of patience, and little pressure, I could finally work off all of the plant and none of the paint!    The only side effect was a very clean section of siding - as you can see in the last comparison photo, the top section was not cleaned, and the bottom was clean as a whistle.  There is not even a trace of the gripers from the vine, and no paint missing.

If you are paying for labour, it would probably be cheaper to replace the siding.  If you don't have a large section to deal with, or you are ready to take this on as a long term personal restoration project, it is quite doable.  If you are leaving some of the plant in place, you must cut it back every week -- they really grow fast.