How do you insulate a basement wall that has a pony wall?

Ron from Penticton, B.C. has a "stepped" foundation with a pony wall from the concrete to the ceiling above. This upper portion is insulated but not the concrete. He wants to insulate it all. He asks: "Does he have to remove the existing drywall, and does the vapour barrier need to extend over the foundation wall, and will he have issues around a "dew point" occurring?" All good questions. 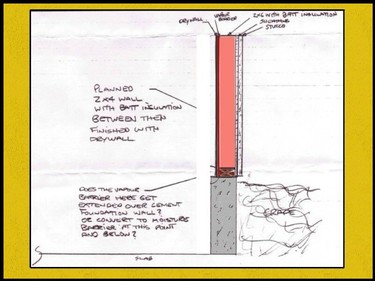 I added a bit of colour to the sketches that Ron sent to make it all clearer. Notice that in the first drawing the wooden wall is not as thick as the concrete wall, hence there is a bit of a set-back. This will have to be filled with insulation. Don't leave any air space in a basement wall.

About that vapour barrier, you can actually have a vapour barrier within the insulation of a wall, as long as you have twice as much insulation on the cold side as on the warm side. In this case, Ron will end up with more insulation on the inside, which will potentially give you "dew point" problems on the presently existing plastic. You could rip off the existing drywall, pull down the vapour barrier and then continue, or you could simply punch a lot of holes right through the drywall and the plastic vapour barrier, basically leaving it in place but eliminating it's moisture blocking capacity. Don't do this with a drill, as it will catch on the fibreglass and really make a mess inside the wall. Use something like an ice pick. Taking it all down does make a better wall and even provides the opportunity to be sure that the joist area is properly sealed air tight. 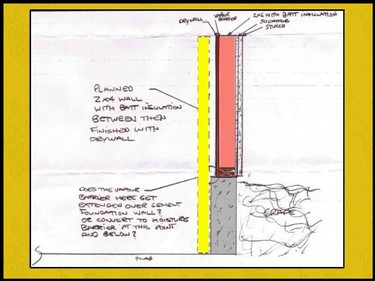 Build your wall over the existing wall but remember to fill in the space between the new and old walls. Then install a good continuous vapour barrier on the warm-in-winter side of the whole assembly.

On the question of whether you should insulate all the way to the floor -- the answer is absolutely yes.

On the question of why we must not have an air spaces in a basement wall (although you could have an air space in the above ground  pony wall), see: Air Spaces in Walls -- Myth and Science.