Can I lower the floor of the basement? 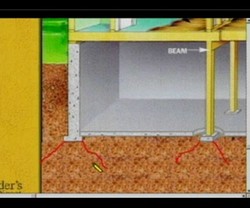 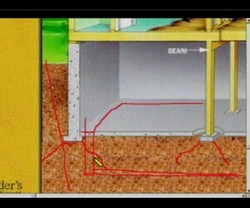 Tom from Thomasburg, Ontario writes: "I'm thinking about buying a house, however the basement has low ceilings. Is it possible to bust out the cement floor instead of jacking up the house?"

Yes you can dig down, but you need to be aware of just how the soil under the house supports the house. All of the weight of the house goes to the foundation, and the foundation sits on a wide strip of concrete called a footing. Even the centre posts do not sit on the concrete floor, but actually sit on a larger footing or pad that is under the floor. In turn, these footings distribute the weight of the house to the soil below but it is important to realise that the soil which actually holds up the house is all of the soil under the footings and spreading out pyramid style at 45 degrees from the edge of the footing. If you dig out the soil straight down alongside the footing, you are removing part of what is holding up the house.

There are two options to make up for removing this soil when lowering a basement floor. The most expensive but most elegant is to drive piles into the ground around the house and catch the footing with hooks attached to the piles, a process called "under-pinning". This essentially transfer's the weight of the house from the footings to the piles rather than to the ground directly under the footing. But it is expensive.

The more common technique is to pour a concrete retaining wall next to the footing on the inside, replacing that removed soil. This restrains the remaining soil and provides the vertical support needed for the weight of the house. The catch with this is that it creates a shelf all around the basement, the walls do not go straight down from the ceiling to the floor. The centre posts are jacked up and then re-installed on new footings below the new concrete floor. What are the details as to size and type of concrete? You will have to ask a structural engineer or a competent contractor to evaluate your particular house. And before the work begins, be sure that the contractor you hire has lots of liability insurance, just in case the foundation decides to slip before the concrete is dry. This is one job you don't want to ever attempt with an under-the-table contractor.