Tip -- Nailing straight is often not the best way to nail. 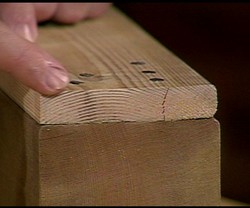 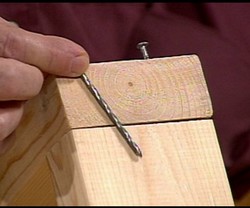 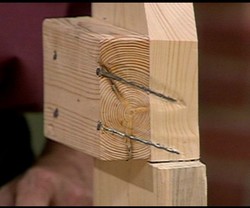 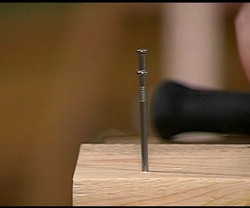 How about some nailing tips.

If you are putting several nails in the end of the board, do not line them up on the same grain line. The accumulative effect of forcing their way through the wood will certainly split the wood. Stagger them so that each is on a different grain line and you have less chance of splitting.

When nailing a 2x4 to something, especially the end of another 2x4, don't drive both nails straight. Run at least one in on an angle and the geometry of the nails together will prevent the board from pulling straight back out.

Similarly, when nailing braces onto a wall, do not nail straight in. Nail on an downward angle and as the weight on top of the brace tries to slide down the wall, the nail will hug the wall rather than pull out. It is often necessary to drill pilot holes in the wood first to be able to nail like this without having the brace slide down the wall away from your mark while nailing.

Double headed nails are commonly available and are used wherever you need to temporarily nail something. The lower head allows you to drive the nail in snugly, but the higher head is sitting there waiting for you to pull it back out when you are ready to remove it.