Tips for working with Steel Studs 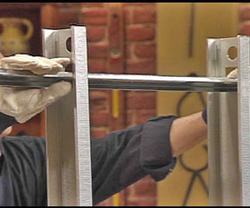 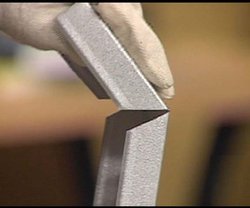 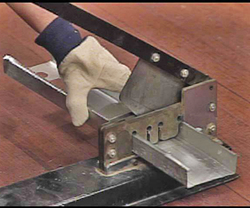 John from Barry, Ontario was asking about using steel studs for a basement renovation. As you might expect, there are pros and cons for any building material.

Steel studs are often less expensive than wood. They are straighter and lighter and are quite quick and easy to work with, although you do need to learn how to work with them. They won't rot, but they can rust.

They require wooden backing nestled right inside the steel stud on any stud that will be carrying a load, like door hinges and latches as well as anyplace you want to hang cupboards. Some people put wood blocking in the bottom of every vertical stud to have something solid for attaching floor trim. Wires need protective grommets so that the stud can't cut through the wire's insulation and copper pipes should not be allowed to touch galvanized steel or there will be an electrolytic reaction between the two, creating a hole in the copper pipe.

Professionals who work with steel studs will have special screw guns that spin faster than most drills or drywall guns, 4,000 rpm, to help cut into the steel with special steel stud fastening screws. You will spend a lot of frustrating time with your regular drill -- rent a steel stud fastening gun when you start the basement job. You must use the proper screws as well, both to grip the studs properly and to have a very small head that will not create a bump through the drywall.

People who have never worked with steel studs before try to assemble them much like a wooden wall but they leave out the blocking. The first photo shows the rigidity bar that is slid through a row of studs and then twisted tightly into place to keep the studs at the right distance from each other.

Corners are best made by only cutting away the flange of floor runner and bending it up, as you can see in the second photo. This gives better strength than trying to butt the vertical stud right into the floor or ceiling runner.

Tin snips work well for trimming the flanges, but tin snips, hack saws and mitre boxes are all poor tools for cutting pieces of steel studs to length. Rent a guillotine made specifically for working with steel studs as you see in the last photo. It has a bracing mould built in that holds all the shapes you need to work with firmly into place while slicing the piece to the length you want.