Clamping difficult objects for gluing up 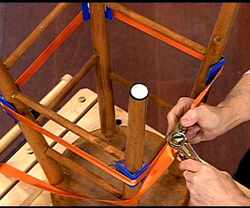 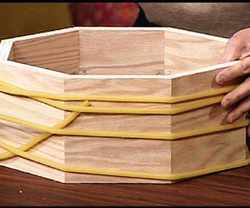 When you need to clamp strange shapes that don't let you use large heavy clamps you need something that you can wrap around and tighten up. Just using tape or string won't put even pressure on the glue joints.

The first photo shows a web clamp, made out of canvas with a ratchet mechanism. Corner pads avoid marring the wood with the canvas and the ratchet lets you bring the whole thing up as tightly as you like.

The second photo illustrates simply using surgical tubing to create a strong even pressure on an odd shape. The more you wrap it, the tighter it gets. The same thing can be done with small objects by using rubber bands.

Traditionally contact cement has been used for situations where you cannot clamp at all. You put it on both pieces, let it get tacky and then simply press it together. Now LePage has come out with a construction adhesive called Power Grab that simply lets you put it on the back of trim, even face brick, and simply push it onto the wall and walk away! It has a very high tack that holds itself in place while the adhesive sets permenantly.