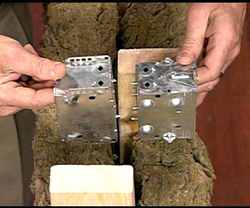 Although the Canadian building codes list about 160 acceptable ways to soundproof party walls, it all comes down to taking care of three basic things.

The high frequencies will cause the drywall itself to vibrate, like the head of a drum, and that can send sound across an open space to the drywall on the other side which will reproduce the vibration and the sound. High frequencies are stopped by using sound absorbing materials either as panels on the wall and/or as soft material inside the walls, as well as using heavier or more layers of drywall.

The biggest offender in hearing your neighbour's noises are called 'flanking paths'. These are air pathways that bypass all other soundproofing efforts. The back to back electrical boxes shown above is a typical example of a bad flanking path. Electrical boxes should not be able to see each other and should be one if not two stud cavities away from each other. Air sealing a party wall will help to stop the noise from the neighbours. Even a skim coat of plaster over concrete blocks has a soundproofing effect simply because it stops the air paths through all those little holes in the concrete. That is a good thing to do before adding anything more to a concrete block party wall.