Have you ever tried to run a string up from the gate latch, through the post and then put a ring or something on the outside. Of course it gets stuck in the wood or breaks, requiring you to either go through the house with your muddy boots, or over the fence. 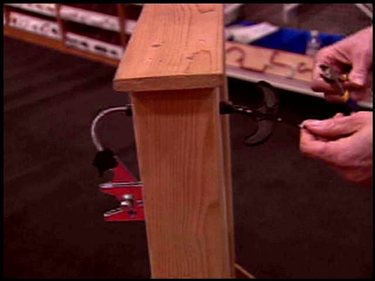 So finally (2014) one of those inventive Canadians came up with Catch-A-Latch, a spring loaded handle mechanism for regular gate latches. It comes in a kit complete with the drill bit for going through the post. Essentially it has guide pieces for going through the post, a spring that will keep the latch down in its locked position every time you close the gate, and a sturdy handle. This is one latch handle that works and lasts.  Many are now on the market with the primary problem that the handle pulls off -- people just pull too hard.

Even with a good catch like this, we often have to adjust the placement of either the tong or the catch because of frost heaving, or spring settling of the gate posts themselves.  So now (2017) we have the self-adjusting gate latch – a real miracle.

The whole catch mechanism slides in a vertical rail on the gate so in addition to the pivoting of the catch lever, the whole catch can move up when the tong is not precisely lined up with the strike section.

Photo 1 shows the gate about to close.   Photo 2 shows the initial contact between the catch and the tong.  Photo 3 starts to rotate the catch lever but rather than forcing because of an alignment problem, picture 4 shows the whole mechanism lifting, but the tong not pivoting.  Photo 5 shows the tong now in the perfect position to slide into place. Picture 6 shows the lever at maximum open and the catch is settling back down by a spring action.  Photo 7 shows the catch fully engaged, the lever is down and the catch mechanism slightly higher than where it started – the adjustment for the moment.  As there is more ice movement, or thaw settling, the whole thing self-adjusts.  There is no more need to reposition the screws several times a year.  A bit of oil occasionally is all that is required. I got mine at Lee Valley Tools for about $20. 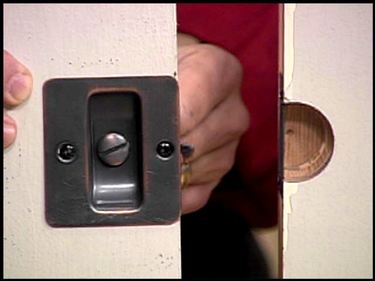 One of our viewers wanted to know if there existed special latching hardware for sliding French doors. There certainly does, as you can see in the second photo. It has a little handle that pops our to pull the door closed and a handle on one side, a screw head on the other side, which pops out a little hook which will catch in a latch on the other side. (The big hole on the right was just so the camera could see the hooking action, inside the door.) This is actually fairly common hardware wherever good door hardware is sold. If they don't have it on the shelf, check their catalogues and they could order it for you.