The room heater is in the ceiling fan! 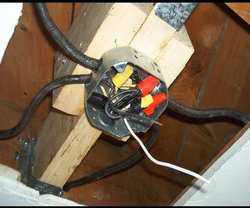 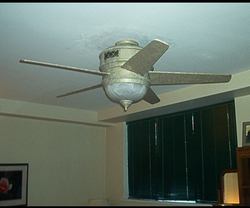 That is an interesting idea. Put the heater on the ceiling as part of a ceiling fan which assures that all that extra heat up there gets circulated all around the room.

Room light, ceiling fan for summer cooling and heating unit for winter heating all in one unit. Add to that a remote control zapper that doubles as the room thermostat. Remote control also means no more pull chains, allowing it to be installed in a very high ceiling without special wiring. Now there is something worth studying.

Companies send me all kinds of products to see what I think and when I received the information on the Reiker Room Conditioner (www.FanHeatLight.com) I decided to have one of my listeners to the Montreal CJAD radio show test it out.

It could be argued that this room conditioner would be ideal for any room in the house, and of course the manufacturer does. But I asked my listeners to come up with rooms where this unit would be especially useful.

One wrote in suggesting that it would be great to replace the baseboard heaters in the kids room, he was really tired of the smell of melted crayons. Paul saw it as a much safer heat source for a room with very young kids.

Paul got it up and running before the end of the winter.

What does Paul think of it? According to the manufacturer it will work best in a fairly closed room, not an open room with air coming in from all sides. That suited Paul's grandkids room perfectly. 'There is nothing really complicated about the assembly or installation, and from what I can tell after examining the parts, it is very well designed and built,' said Paul He was a little worried about the weight of the unit, heavier than most ceiling fans at 35 pounds, so after discovering that his present fan was hanging by a prayer he went to the trouble of building a good reinforcement in the ceiling, as you can see in the first photo. Paul's comment was: 'If this doesn't hold the unit securely, as I said before, I will leave the country, preferably for a warmer climate.'

The fact that the heater runs on 120 volts makes things simple, the wiring that was already there did not need to be replaced. It does however require a dedicated 15 amp circuit - you don't want a string of other lights on the line.

Of course by now, because he was doing it all from below the ceiling (couldn't get into the roof space), he had to pause to install drywall and plaster the hole. Paint is for later. Finally, 'The unit is ready to be mounted, just waiting for extra pair of hands - my grandson probably.'

'I was curious to see how the remote control unit functioned, so I gave it a quickie test without the fan blades installed. The main functions - less lighting - seemed to be working o.k. and there was no vibration and minimal noise - very gratifying. THIS IS ALMOST CERTAINLY DUE TO BEING CAREFUL TO HAVE THE MOUNTING BRACKET AS LEVEL AS POSSIBLE, and I would stress this point when preparing the ceiling,' reported Paul.

He got it up and running before the end of the winter and did some serious testing as to how rapidly it would warm up the room and how well it kept it evenly warm. He was impressed.

I would recommend this unit as a very good room heater where electrical heat would normally be used. Don't even bother to put in baseboard heaters or turn them off. It is definitely more efficient at distributing heat than the fancy wall mounted convection electric heaters. It could even be a good top up heater in cold bedrooms where gas or oil provides the basic forced air furnace power.