OVERVIEW: When do I need to remove snow from a roof?

For most houses, never -- let nature handle it. The reason for that is that most roofs are built to handle the snow that is piled up on it, removing snow is dangerous to you and often the process of snow removal causes more damage to the roof than the snow would. Those were the conclusions that were drawn by several studies carried out after the infamous Eastern Canada and US Ice Storm of January 1998.

FALLING OFF ROOFS KILLS MORE PEOPLE THAN ROOFS FALLING IN

Removing snow is not only dangerous for your house. Be aware that in the last few years 16 homeowners have died trying to remove snow from roofs in Montreal alone (writtenin 2013). It is more dangerous than you might think. Do not work alone. If you can't see where you are throwing snow, like over the edge of a high flat roof, have a spotter below who will keep pedestrians away and who can communicate with you by cell phone. Remember that clumps of hard snow or ice thrown from a third story flat roof can do serious damage to a car below. 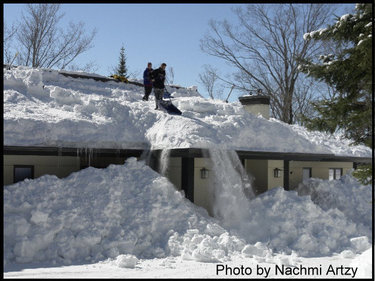 If you do clear a roof, do not try to remove the last layer of ice or snow that is attached to the roof. Remove the weight above it but leave that layer to protect the roof membrane or shingles. Trying to go right down to the roof will most likely cause the roof to leak when things begin to thaw.

THE WEIGHT, OR LIGHTNESS, OF THE SNOW IS IMPORTANT

Also be aware that any guide-line that simply says remove snow after 6 or 12 inches of accumulation is not taking into account the actual weight of the snow. If you think about shoveling snow you know that there is light snow and there is heavy snow -- in fact snow weight varies from fluffy flakes to heavy water soaked snow to solid ice, and even ice can be light and heavy depending on how much it is made up of air bubbles.

COMMERCIAL BUILDING ARE MORE AT RISK THAN RESIDENTIAL HOUSES

During periods of exceptionally heavy accumulations of snow, we read in the papers about shopping centres, warehouses and bingo halls caving in -- shouldn't that be a sign that our houses are in danger? Not necessarily. These spread-out flat steel structure roofs are actually more vulnerable than our homes because of the very large open spaces and are built with the assumption that they receive regular professional maintenance -- including watching the snow loads and removing snow when necessary. Our houses have more structural support in a smaller space and are designed to survive under most bad conditions without snow removal, although the flatter the roof, the more vulnerable it is to accumulated snow loads.

Actually our forefathers built smarter houses than we do today in that any area that had heavy accumulations of snow they built very steep pitched roofs and often slippery metal roofs that wouldn't hold snow at all -- witness the Swiss A-Frame chalets. Today we build houses with large open spaces that designers think look great so the engineers have to work harder to safely carry all of that snow. Creating open spaces during renovation by removing walls requires more structural engineering planning than we imagine.   Montreal for instance has some of the heaviest snow loads in the country -- we don't get more snow than many regions, but we get wetter heavier snow. Consequently our building codes require stronger roofs.

During the famous east coast ice storm of 1998, the only residential roofs that collapsed in that exceptional weather event were ones where interior support walls had been removed or modified by renovation work done without permits.

WHEN IS SNOW ON THE ROOF TOO MUCH SNOW?

So, when is snow too much snow? The easiest indicator, that professionals and homeowners alike can use, is to keep an eye on center-of-the-house doors, like the door to the bedroom upstairs. If it does not stick or jam at all before the snow (except perhaps seasonally in the humidity of the summer) and it does begin to stick as the snow accumulates, that is like a thermometer that says your house has a fever, there is a problem. You should also keep an eye open for new cracks in the plaster or drywall, usually near corners of those inside doorways. Depending on the degree of the problem, you may need to remove some weight, or have someone remove some weight -- but you probably do want to call the doctor: have a construction professional take a look at it. If you ask a lot of questions during that visit, they may be able to teach you to read the signs that will tell you when your individual house needs snow removal or doesn't need snow removal yet. Whether you end up removing snow or not, if those doors did jamb you should have your roof structure inspected in the Spring -- you could have minor or major problems with the roof trusses from loose connectors to rotten wood. Those trusses are supposed to carry that load without pushing down on those doors despite heavy snow.

If it is a flat basin roof (slopes to a central drain) it is "relatively" safe to work on the roof as you can fall over the edge but you won't just slide off the edge. If it is a flat roof that slopes to an edge you should take the same type of precautions that you should take on a steeper slopped roof -- either work from the edge and don't get on the roof at all or use a safety rope attached to a solid tree on the opposite side of the house. You should buy or rent a harness, a strapping arrangement that you see mountain climbers and construction workers wearing that allows for a good attachment of a safety rope -- one rope for your ladder, another rope for you.

By the way, the technique for throwing a rope over the roof is to use a fishing rod and reel to cast over the roof and then draw the rope back.

Snow can be drawn down the roof, a little at a time working from the bottom edge towards the top. Ice however should be removed working from the top of the roof down so that the released ice can slide off the roof sliding on ice, not sliding on exposed shingles -- a big lesson from the ice storm. Rarely should we ever remove ice right down to the shingles or membranes but leave a bit of a protective ice layer.  That last little bit of ice is stuck to the roof covering and you will probably create water leaks trying to remove it.  Removing snow or ice is a job to be done by a professional who has both accident insurance and responsibility insurance in case he damages himself or your roof. Get It In Writing!

Removal of ice from the edge of the roof is best done with non-salt chemical de-icers or electrical de-icing cables -- not with hatchets or hammers. Chopping and cutting caused more roof problems than all the ice during that big ice storm. Any ladders should be tied down on both sides to prevent slipping sideways and even tied to a line over the house so it can't be pushed backwards by sliding snow -- and never work alone. If you have an ice dam with water backed up behind it, do not place yourself right were the water will come out when you break or melt through the dam -- rushing cold water can convince you to jump right off the ladder -- not a good option. Follow this link for more information on Ice Dams.