Have we really moved to a new generation of Pressure Treated Wood?

With the introduction of MicroPro treated wood to the Canadian market in the spring of 2013, some are saying that we have a game change in exteriour wood and building decks.  It has taken several years to get this technology adapted to Canadian species wood and then through the Canadian approvals process and during this time it has taken over the majority of PTW sales in the U.S.  Will it do the same in Canada?

The answer is YES -- but let me back up to explain why.  You may also want to see the long Overview of the Pressure Treated Debates. 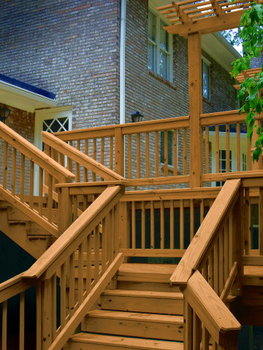 To slow that down our ancestors painted and coated it to reduce water penetration.  That was not terribly effective and required high maintenance.

Industrial demands needed better so rather than just reducing water penetration, efforts were made to attack both bugs and fungus that degrade wood.  Railway ties were soaked in a tar like mixture called creosote.  Railway ties were always well drained up on their raised roadway and lasted a long time -- but smelled bad and leached a lot if constantly wet, so this was not an elegant solution near habitations.

Next came the idea of Pressure Treated wood, forcing chemicals into the wood with pressure and then heat drying them to fix the chemicals in place.  A number of formulations have come and some gone but CCA (Chrome, copper and Arsenic) was very effective and stable, becoming our generation's standard Pressure Treated Wood.  After many years of success as a reliable building material, the ecological movement became very concerned about leaching out of arsenic - a hotly debated issue that the ecologists never won in court.  Contrary to popular belief, CCA has never been banned, and is still commonly used in industrial and commercial use for such things as telephone poles, but in 2004 the industry quit the fight and voluntarily removed it from residential construction.  In fact it could be argued that CCA was overkill for residential use and not worth fighting the ecological public opinion battle.

Enter ACQ (Alkaline copper quaternary) and to a lesser extent CA (Copper Azole) applied with about the same pressure and heat treatment.  The arsenic was gone and the effectiveness against fungus was gained by using far more copper.   These solutions preserved wood effectively but had unexpected side effects. The copper was somewhat mobile in the wood and copper causes corrosion with steel, zinc (galvanization) and especially aluminium.  We all lived through the period of changing our fasteners, using rubber separators to keep the wood away from metal and worrying about the longevity of the structure, not of the wood.  In addition it was discovered that the extra copper would leach out enough to bother small micro-organisms in fresh water lakes and rivers.  Pressure treated wood, now considered safe for humans was banned in lakes.

It is interesting to note that up to this point; most of the chemicals used for PTW were almost generic formulations.  Everyone was selling about the same thing.  Here is where things have begun to change.  Pushing the technology to preserve wood while solving all the side issues has required more research and opened the door to patented proprietary solutions.

One such solution, and by far the front runner, is MicroPro developed by Osmose Corp and often referred to as MCA.  In Canada check the Timber Specialties web site.  MicroPro uses as much copper as ACQ but uses it quite differently.  Rather than dissolving copper into a solvent based solution as with ACQ wood, they grind the copper to a microscopic fineness that is small enough to actually pass through the pores of the walls of the wood cells when under pressure.  This deposits the copper inside a cell, not on the surface.  Once cured, there is no water flow or pressure moving from inside the cell outward, so the copper never moves again.

That solved both the leaching problem and kept the copper away from contact with fasteners, brackets and metal trim.   No more accelerated corrosion of fasteners, although it is always good to use the best of rust resistant fasteners outdoors, the wood is no longer contributing to the corrosion.

Accelerating aging tests have MCA outperforming ACQ.  Using water rather than solvents solved the VOC problems.  In addition the water based process allows for more effective colour treatment, meaning that a light cedar or reddish brown can be given to a mixed variety of Canadian wood species, as typically come in any construction lumber batch, meaning that the deck has a evenly uniform colour.

So today we actually have a NAHB Green Approved PTW -- you read that right, a Canadian building code compliant Pressure Treated Wood that is considered a Green product.

They call it "Goodfellow Terra" in the east and "MicroPro Sienna Treated Wood" in the west and by consumer demand all of it is pre-stained a light brown.  You might also see the names "Nature Wood" or "NW 100"; look for the ingredients Alkaline Copper Quaternary or MCA.  I imported MicroPro wood several years ago from the states to test this stuff on my own deck -- and I am impressed.

And the End Cut treatment got better too 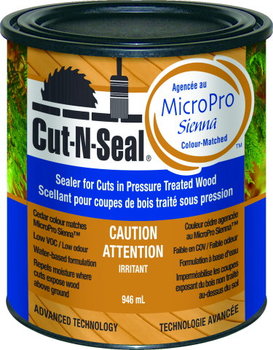 Now combine MicroPro with Timber Specialities Cut-N-Seal water based end cut treatment and we have changed the game of Deck Building.  This is the end cut product that I talked about so much last year because it doesn't smell like the pit in a truck repair station while being light green or colour matched to the wood.  Brushing on end cut is no longer the worst part of deck building.

I have been waiting for MicroPro treated wood to finally get on the shelves in Canada so that we can address sustainable building and ecological concerns at the same time!  It is in stock now.

For details on applying End Cut treatment, follow this link.

*reprinted from my article in the Canadian Home Builder Magazine, March 2013.

If you are thinking of going to exotic hardwoods like Îpe for your decking, take a look first at the more environmentally responbible Kebony wood.