Shingle starter strip & should you remove that plastic strip?

For an overview on changing the roof or roof covering on a house and special information on Mansard roof shingles -- follow this link.

If you put the first row of shingles on the edge of the roof just like all the rest, you will see the bare roof deck through the cracks between the shingles.  Many self-taught roofers follow the wrong technique of installing the first row backwards, with the tabs pointing up the roof to get a continuous strip of roofing under the first set of tabs.  There are two problems with this technique.

First this creates a bump on the bottom of the roof with one extra layer of shingle: the tabs that point up, the continuous portion of the next shingle over those tabs and then the tabs of the final shingle on the top. Above and below this area, there are only two layers -- hence the unsightly "bump".

Second, there is no glue under the tabs right at the edge of the roof and the wind can easily rip off these shingles. 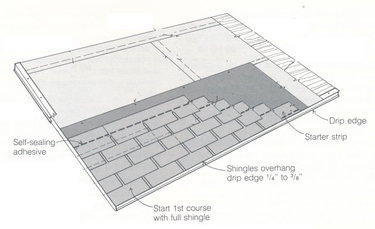 The professional way of starting the roof is with a starter roll – which is a long section of shingle with no tabs, but it is exactly the right width to keep the thickness pattern right up the roof, and it has that line of adhesive to catch the shingle tab above.

You can get the same results by installing a first line of shingles with the tab cut off completely but place them as if the tabs were hanging off the roof.  This creates the proper thickness pattern on the roof and places the adhesive line just on the edge of the roof.

The shingle release film -- you DO NOT need to remove it!

When you open up a package of shingles you will notice a plastic strip stuck to the bottom of each shingle.  What is this and does it have to be removed?  I actually stumbled into giving the wrong answer on the radio recently – so I decided to make this entry into the database to be very clear.  The plastic does NOT have to be removed – which saves a lot of trouble and plastic flying around the yard.

So what is this plastic strip and why does it need to be there in the package and does not need to be removed before nailing the shingle to the roof?

To prevent the wind from catching the loose ends of the shingle tabs there is a line of adhesive on the top of the shingle which just lines up with the loose end of the tab of the shingle above -- as you can see in the graphic.  The sun will heat this up and make them stick together once on the roof.  But we don’t want them to stick together in the package so a protective strip is stuck to the bottom of the shingle, just lined up with this adhesive strip when they are stacked in a package.  When you spread them out on the roof, the strip does not line up with the adhesive so it does nothing and the adhesive can do its job.  Originally these strips had to be removed, but many years ago they changed to a special polyethylene film that will dissolve itself with the heat of the sun over a period of less than one year.

What most people don’t realize is that since the nail holding the shingle on the roof is placed just below this glue line the adhesive transfers this attachment to the roof deck upwards to the tabs of the shingles above, almost as if you had nailed down the tabs – hence really good wind resistance.

So I was right that these plastic strips prevent the shingles from sticking together in the package and wrong when I said you needed to remove it – well I was right in the 1950’s but rather out of date today.  With today’s technology, the plastic strip will dissolve on its own.  I thank Michel Boyer for sending me the CASMA Technical Bulletin No. 24 – (2012) which I give you here as a resource:

By the late 1950’s, manufacturers had developed an alternate way to protect the factory-applied adhesive. Rather than a cumbersome “removable” film, they merely applied/adhered a smooth film on the bottom of the shingle in the exact area that contacted the sealant strip of the shingle below while the shingles were packaged in the bundle. This release film prevents the sealant from “activating” while the shingles are in the bundle. (The sealant on the top shingle in each package is protected by special treatment applied to that area of the bundle wrapper.) Once the shingles were unpacked and arranged on the roof for installation, the protective film had served its purpose and could be left in place. Early release films were sometimes aluminum foil or special paper, but now clear plastic is most common.

This manufacturing practice is still used by manufacturers today. The tape on the back of asphalt shingles does not need to be removed. In fact it is not really designed for removal, so it is often quite difficult to remove! Removing this film will in no way help the shingles bond faster, seal to each other better, or last longer on the roof.”  www.casma.ca