A cat shelter in a cold climate

Lots of CJAD listeners want to see pictures of the house of the roaming cat that has claimed me as his property.  Understand this house is a bit of an evolving concept.  It started out as an effort to help this 10-year-old cat get through the winter despite his desire to roam more than settle.  Yes, we found his owner, but as she said, “He has always lived outdoors and seems to change where he hangs out from time to time.”  I guess my wife and I are his latest “kick”.

FEELING CONNECTED THROUGH A WINDOW 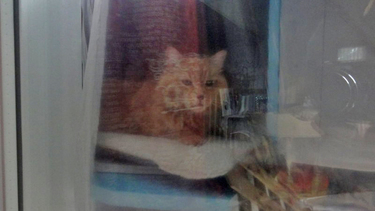 The design was for letting the cat look into a window on the front porch.  The idea was to let him feel connected while still outside, and to be warm while patient because we always get up later than he does and he would see us before leaving the shelter to sit at the door wanting to get in.   Unfortunately, only other stray cats wanted to stay in it, not Caesar.  Since this cat had claimed the back deck and defends it, I moved the hutch to the back deck and stuck it out over a glass patio door, a bit of a structural mis-match but the same concept. 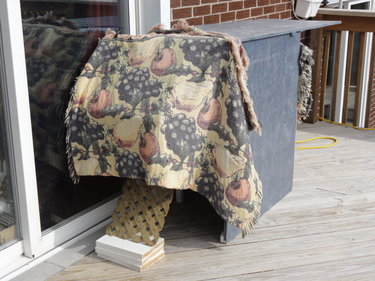 That is why the apartment is so high, but it is nicely above snow levels.  The large roof was to shed water off of the front porch – now it helps to keep the back door dry. 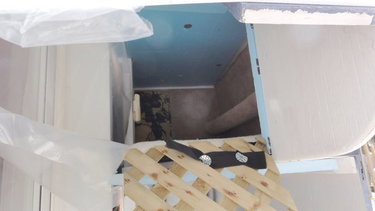 It started with a heated cushion that I found on the web.  This K&H Extreme Weather Heated Kitty Pad & Cover  cushion was really designed for barn cats in the cold prairies!  He loves it.  2020: A bit hard to find in Canada, Amazon.ca has it at twice the price.

Then I got a heated food and water bowl.  I now only use that very discretely, like when we will be gone for more than a day or it is really cold overnight.  Why?  I don’t want to invite all the other urban wildlife to dinner, like our frequent squirrels, raccoons, other cats and skunks (cute but I really don’t want to build them a house).  In fact I will put no food in it as soon as those other critters give up on hibernation.  Actually it turned out that this “outdoor heated bowl” at 40 watts was much safer and more comfortable than a light bulb for a bit of room heat.  The cushion only heats when and where the cat lies –so at first he didn’t get it.

DESIGING FOR THE OCCUPANT 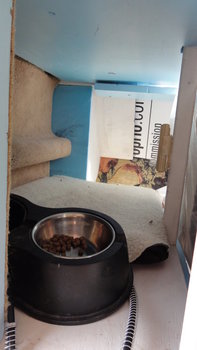 I insulated the house with Styrofoam and thick blankets for moving entrance and exit doors (research told me to always have an escape door in a cat house, there may be a reason they want an exit rather to stand and fight an intruder), plus a water proofing plastic sheet on the house side to keep him dry during rain yet still warm during cold but most importantly allowing him to see in and feel like he is already “in” our kitchen.  Trying photography through a thermal pane window and a plastic sheet is why Caesar is rather fuzzy in the photo.

He didn’t really adapt to this house until I covered one side with a rug, and shaped the rug to the same profile as the carpeted stairs indoors that he has adopted as his favorite place to cuddle and grab into the overhang.  You can see that in the photo taken through the back door.  The ramp was important to avoid having to jump into a dark place that may be occupied (it is amazing how many farmers chat about taking care of barn cats) – and I had to adjust and observe to find the appropriate angle for Caesar to feel comfortable going both up and down.

Yes, that is a thermometer you see in his apartment.  Generally it stays about 10C warmer than outdoors, a bit more after Caesar has been there for a while.  No, I don’t think I will install air conditioning in the summertime.

Contractors should pay as much attention to the psychological side of their customers as I do for this occupant.