Certain parts of Canada, particularly in the Winnipeg region, have a traditional construction technique that presents serious challenges when you want to insulate a basement -- the ends of the joists are actually embedded in the concrete foundation wall.  Chris, from Winnipeg, asked for some fine detail to insulate his basement right, he wasn't satisfied with Manatobia Hydro's instructions to just shoot the header area full of foam insulation.  Chris figured it out better than Manatobia Hydro did.   First let's back-up to see how these houses were constructed.  How about a little animation so you can actually see it all. 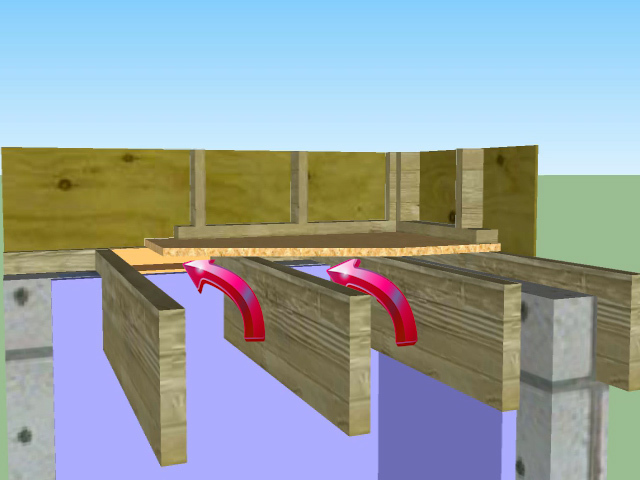 The floor joists are assembled to the rim joists and placed into special foundation forms.  They are shimmed up perfectly level before pouring the concrete -- yes the entire joist section is suspended in the air.

Then the concrete is poured, creating a structural support for the rim joist all around, as well as embedding at least 2/3rds of the ends of every joist into the concrete.  The concrete does not have to be leveled off perfectly because the framing for the house is already perfectly level and the entire structure is fully supported by the rising liquid concrete.

Then the sub-floor and the rest of the structure is built with old balloon framing or the more modern platform framing that we are so used to today.   Heat losses from the basement kept the joists dry and solid for decades.

EVERYTHING IS FINE UNTIL YOU ADD INSULATION

The problems come when we add insulation.  Where the heat used to keep the ends of the joists dry, the insulation now blocks that heat, but not necessarily all the moisture and the embedded joists often collect condensation and rot out inside the concrete – particularly on the north side of the house where the sun doesn’t help out.   Ideally you would simply insulate the entire wall on the outside, or at least all the wood structure including the rim joists on the outside to keep everything warm and dry -- but that is often not practical in old existing houses.

HOW TO INSULATE ON THE INSIDE

So what can be done to make this all function well while insulating from the inside?

It is important to seal all joints between the wood and the concrete, ideally before insulating.  That will minimize moisture movement to the cold side.  Then insulate the entire wall on the inside.

If you insulate with either expanded polystyrene or fiberglass that does not stop moisture you need a vapour barrier over the warm in winter side -- including the top of the wall where it opens up to the joist area.  This is an important detail.

Insulate with a “planned heat loss”

But what can we do about that narrow cavity between the top of the concrete and the sub-floor above?  This space can measure anywhere from 3 to just 1 inch high.  The instinct is to fill it all with insulation, but this makes the ends of the joists even colder and not totally protected from moisture.  This also tends to allow the thermal bridge at the sub-floor and the bottom of the wall above -- to chill the floor all around the room above -- often collecting large quantities of frost inside the house!

First air seal the header area as best you can -- probably shooting a thin 1 inch layer of spray foam on the rim joist deep in that cavity.  This provides a minimum of insulation, doesn't block heat from warming the floor above, but controls a lot of moisture movement.

Then if possible you add about 1 inch of foam insulation board over the top of the concrete ledge, if you have enough room, carefully sealing this to the insulation on the face of the wall.  This controls a lot of the moisture, controls air leakage and gives some insulation over the concrete but allows for heat to flow from the basement up to the floor above. Actually if you are able to get a little foam insulation board horizontally over the top of the concrete, do that first.  In fact, pre-caulk the edges as you place them so they will seal to the sides of the joists -- where it would be difficult to reach into the cavity and caulk later.  Then spary the thin insulation in the back.  By doing that second, the joint between the insulating board and the spray foam will be totally sealed.

Not insulating the joist itself helps to keep it dry.

Compromise on the fuel costs to protect the structure

Yes, we must loose heat to protect the structure -- a PLANNED HEAT LOSS.  Insulating this kind of a basement on the inside requires that you pay the fuel bill to heat the critical floor space above the concrete foundation wall while insulating the larger part of the basement.