One homeowner had an annoying screech coming from her hydronic heating system that was hard to trace because it only happened occasionally and then usually late at night.  The servicemen could find nothing wrong, and of course it never made a screech when they were there.

I asked her to prepare to record the sound the next time it woke her up -- since she didn't want to keep the plumber around all night.  Specifically I asked her to start in the garage where you could hear the noise but not loudly -- there were no heating pipes in the garage.  Then the furnace room and elsewhere in the house, stating where she was each time then remaining silent for a few seconds to get a clean recording of the screech.

As expected, plumbers who listened to the recording quickly accused the water circulation pump bearings.  The coming and going of the noise was attributed to the pump running cold or heated to a high temperature -- expanding the metal around the bearings.  Finally someone came with an oil can -- a few drops later and the midnight screach was relagated to a memory of the past -- but here it is for you to hear - and see. 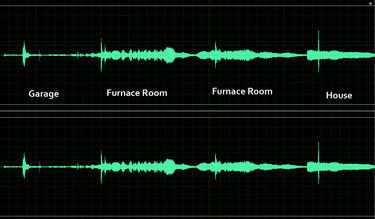 If we look at the audio waveform of this recording, even with something as imprecise as a cell phone recording, we can actually see a difference in three of the noises, differences that we can barely hear with our ears.  In the first furnace room recording you can see distinct grouping of the sound with high and low blasts and a lot of variability.  In the second furnace room recording that is already being blurred out to a more even sound and in the third section up in the house far away from the source, it is a smooth almost even sound.  That tells us that the source of the sound is right next to the first furnace room recording even though the noise throughout the furnace room was so loud that it was difficult to trace it to a specific area.  If we were to record this again, just before the pump, just after the pump, right on the pump, we might be able to “see” which bearing is giving out.

All of this to make two points:

Recording noises that come and go and you can’t describe well can often lead technicians to more quickly identifying the problem;

Looking at sound waves can give us more specific information than we can get by simply listening.

Technical note – the Erickson cell phone .amr compressed sound file can be converted to a more common mp3 file with the free VLC player from http://www.videolan.org/ .  Any free audio editing software will give you the wave form of the mp3.