Topics: A polished granite slab balcony is too slippery...

Investigation technique number one: divide the question with a test that will remove half the possible causes.  So I put a paper towel over the bowl.  If there were 14 almonds in the bowl and the towel was not pushed to the side, it was my mind.  If the towel was pushed over I could claim, without proof, that it was an animal of some sort. 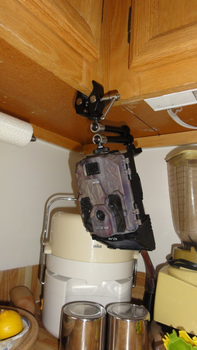 Better proof: Install a sport’s infrared motion activated camera – SpyPoint, made in Quebec!  I had already used this to identify just who was getting into my attic and how and then to be able to be sure they were both outside when I boarded up the soffits. 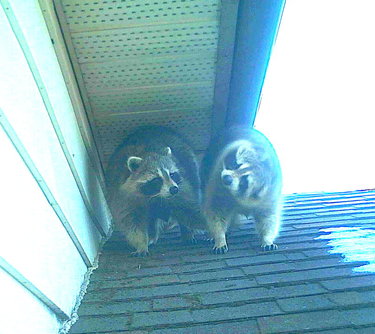 See the SpyPoint night photo of my two housemates begrudgingly walking away from the boarded up soffits.  Translation of the look on her face: “George, you found me the perfect insulated attic to raise my family in and we can’t get back in.  Now what are you going to do.  You’ve got one week.” 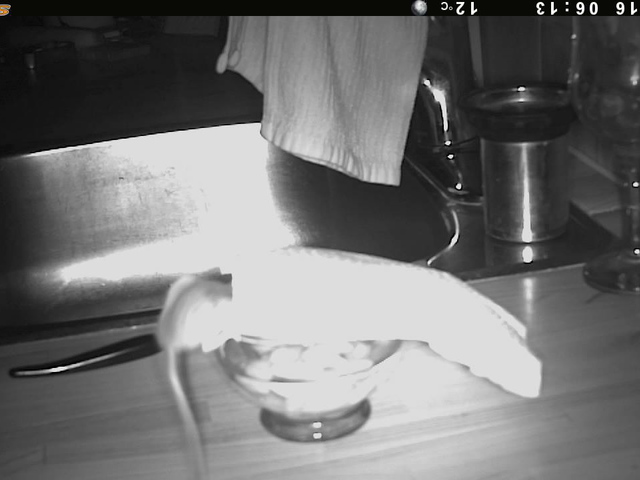 The almond thief caught red pawed: Photo proof, and even a full record of his entry, James Bond talents, and his exit.

Refine tactics: Now we know what size he is.  So we can lure him back with the same almonds that he has gotten used to, but with a lid to make it difficult to gain entry – and a live trap with smell good peanut butter that is much easier to get into.  Then a trip to the woods for the abundant food of spring growth.

Now that I can reaffirm that I am still capable of counting out 20 almonds, I guess I have to prove that I can track down where he got into the house.  To be continued.

He ignored the live trap but left dropping clues that he was hanging out around the refrigerator.  When we pulled the frig out, we discovered he had a great store of almonds and an abundance of water available from the condensing coils.  Take note for trying to track down where a bothersome mouse might be hiding out -- pull the refrigerator forward and inspect the full underside where it is warm, dark and has a constant supply of water.  Plugging all the passageways right under the frig are not easy, but do it with steel or brass wool that will not rust and he won't be able to chew his way back in.

I removed all his store of food and replaced it with the live trap.  He is now learning how to eat fresh growth in a large forested area.  Still don't know where he came into the house -- he wouldn't tell.