One of our callers had one missing roof shingle. How to replace it? 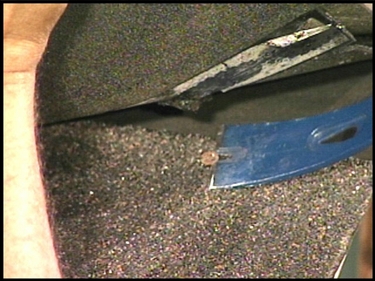 Working on a warm day, lift the shingle above to expose the nails. Remove the nail, or cut out around the nail to release the damaged shingle. Pound the nail in flush or pull it out. Getting rid of this nail is probably the hardest part of the job. 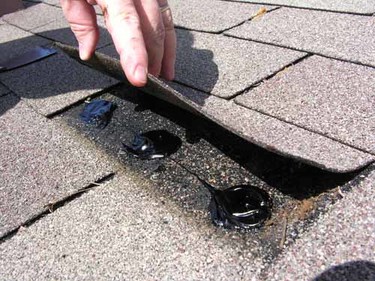 Slide a new shingle into place. Nail it as was the original shingle. Add a few dabs of roofing cement under the lower edge of the new shingle to get it to stick to the shingle below. Be careful, there is almost too much adhesive in this photo as you do not want it to squeeze out where it will make a black spot on a light coloured shingle.  See Weather restrictions on using roofing cement. The sun should activate the adhesive on that is built into the replacement shingle to stick to the tabs on the shingle higher up.

Be very careful as all the surrounding shingles may be brittle. Don't expect a perfect colour match, but time and sunshine will even that out a bit.