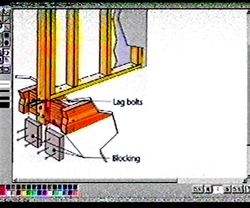 Fred from Keswick had built a large deck with a fanned out stairway and was wondering where was the best place to install a hand rail.

This TV show was recorded in the early days of the internet and it was rather novel to hold a NetMeeting with Fred on live TV so that we could both draw on the same drawing by way of an internet connection. The photo of that net meeting shows how to properly anchor a free standing newel -- the post at the bottom of the steps.

There always needs to be at least one hand rail to go down from a deck, even if it is discrete and off to one side, just in case the steps or slippery or someone with a bit of a mobility problem can get a stable hold to go up or down the stairs. On the other hand, a hand rail could be put right in prominence as a design feature. The key is that wherever it is put, it has to be firmly attached and safe. Another point is that it should extend down beyond the bottom step to maintain that good support until you are safely down on the ground.