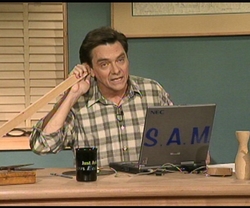 Brian in Mississauga wakes his kid up every night because the bedroom floor squeaks so badly. Brian send me his floor plan, showing a large stairwell opening in line with the problem bedroom and no support walls below. He already screwed the plywood down to the floor, to no avail.

Before we can even guess at a solution to the problem, we need to undertake some tests to determine exactly where is the squeak coming from, and what is causing it.

Brian had already done the first test I suggested, taking two 5 foot sticks, putting one to the ceiling below the floor and the other to the floor below it and holding the two sticks together. Then, with someone walking on the floor above, he could actually measure the deflection of the floor near that stairwell. He reported that it did move, about 1 mm. Not much, but enough to clearly feel it as the two sticks moved against each other.

I gave Brian some more homework:

Use a broom stick like a stethoscope to hear exactly where the noise is coming from; yes that is why I have a stick in my ear in the photo.

Erect a temporary wall below the problem to see if it stops the problem.

Check out show # 3-21 for the second installment of the Sherlock Squeak Case.