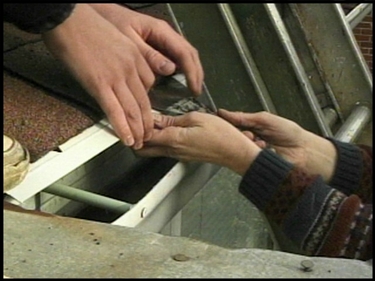 Barbara in Montreal had water damage in her bay window area as wind driven rain always found it's way in. Contractor repair bids ranged from $1,200 for a patch to $4,000 for a new roof. A study of the detail where the added-on bay window joined the very edge of the roof showed a flashing flaw that just invited water inside when the wind was blowing. Installing a drip edge at this point, which should have been done when the roof was shingled, looked like the solution -- but none of the contractors spotted this. One of them didn't even go on the roof.

As a single mother who wants to wait a year or two before reshingling the roof, Barbara and her son took on the job. The photo shows the two of them sliding the drip edge in under the shingles. One afternoon and $40 later, the problem appears to be solved!

Follow this link for details on installing a drip edge during roofing.