The mathematical challenge - A Walkway Curve 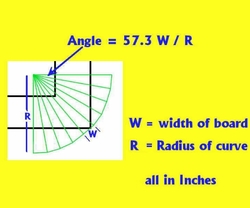 Don in Winnipeg wanted to make a wooden walkway. He wanted to fan the boards out at the 90 degree corner, but couldn't figure out how to calculate the angle to cut the boards to make them fit.

The first important reflection was that the center point of this fanning out should not be right in the corner of the walkway, or the boards would be cut to such a fine point (in the centre of the pie) that they would have no strength for walking. Pulling the centre point back would leave a bit more meat on the walkway boards.

So, what is the mathematical formula for calculating the angle to cut the boards?
57.3W/R of course. The details are on the graphic, but this didn't really come out of nowhere, and it wasn't really that complicated either.